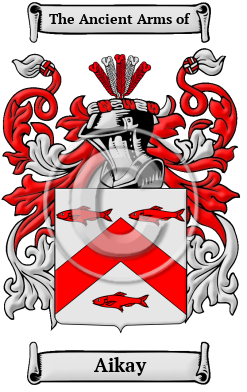 The Viking settlers of ancient Scotland were the first to use the name Aikay. It was a nickname for a hooked or crooked person. This nickname was originally derived from the Old Norse word haki which meant "hook" or "something crooked." [1]

Early Origins of the Aikay family

The surname Aikay was first found in the county of Norfolk where Turkil Hako was listed there in Domesday Book [4]. Later the Assize Rolls of Lincolnshire listed Leuiua filia Hacke as holding lands there in 1218 - a very rare entry for a female or "daughter" to hold lands at that time. Later again, Gilbert Hale was listed in the Feet of Fines of Staffordshire in 1257. [5]

Early History of the Aikay family

Spelling variations are extremely common among Scottish names dating from this era because the arts of spelling and translation were not yet standardized. Spelling was done by sound, and translation from Gaelic to English was generally quite careless. In different records, Aikay has been spelled Hake, Hakes, Hakke, Hacke and others.

Notable amongst the Clan from early times was Edward Hake, ( fl. 1579), an English satirist who was patronized by the Earl of Leicester, known for his Newes out of Paules Churchyarde, A Trappe for Syr Monye, whi was first published in 1567. No copy of the 1567 edition is known; but the work was reprinted in 1579. "From the dedication to the Earl of Leicester we learn that at this date Hake was under-steward...
Another 74 words (5 lines of text) are included under the topic Early Aikay Notables in all our PDF Extended History products and printed products wherever possible.

Migration of the Aikay family

Those who made the voyage were greeted with ample opportunity to acquire land and a political climate far away from the oppressive monarchy of the old country. They settled along the east coast of what would become Canada and the United States. In the American War of Independence, those who remained loyal to England traveled north to Canada as United Empire Loyalists. In this century, many Scots living in North America have begun to recover their rich heritage through festivals, highland games, and Clan societies. An examination of passenger and immigration lists has shown early immigrants bearing the name Aikay: Thomas Hakes who died at Jamestown, Virginia in 1623; John Maximilian Hake who sailed to Philadelphia, Pa. in 1774 and Nicolaus Hake who settled in Philadelphia, Pa. in 1798..