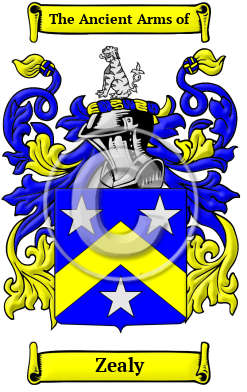 The history of the name Zealy began when it was derived from happy person who had good fortune. It is derive from the Old English word saelig, meaning happy and blessed. [1]

Early listings of the name was typically seen a "sely" and "seli" and was referenced at least twice in Chaucer's Canterbury Tales:

"For sely is that deth, soth for to seyne, That, ofte y- cleped, com'th and endeth peyne"; and

"That Nicholas shal shapen hym a wyle This sely, jalous housbonde to bigyle."

Early Origins of the Zealy family

The surname Zealy was first found in Somerset where the first listings of name were found as a personal name: Sely atte Bergh; Sely Percy; and Sely Scury. All were found in Kirby's Quest temp. 1 Edward III (during the first year's reign of King Edward III. [2] The one exception of the aforementioned was William Sely.

The Hundredorum Rolls of 1273 has some interesting entries too: William Sely in Oxfordshire; Egidius Sely in Norfolk; and John Sely in Gloucestershire. [4]

Early History of the Zealy family

The Old and Middle English languages lacked definite spelling rules, and therefore, Breton surnames have many spelling variations. Latin and French, which were the official court languages, were also influential on the spelling of surnames. The spelling of surnames was rarely consistent in medieval times, and scribes and church officials recorded names as they sounded rather than adhering to any specific spelling rules. Therefore, it was common to find the same individual referred to with different spellings of their surname in the ancient chronicles. Moreover, a large number of foreign names were brought into England after the Norman Conquest, which accelerated and accentuated the alterations to the spelling of various surnames. The name has been spelled Cely, Ceeley, Celey, Ceely, Ceiley, Seely, Seeley and others.

Notable amongst the family at this time was Sir Benet Celey of Plymouth; and Robert Seeley, also Seely, Seelye, or Ciely, (1602-1668) born in Bluntisham-cum-Earith, Huntingdonshire, he was an early Puritan settler who sailed with John Winthrop to the Massachusetts Bay Colony in 1630 helping establish Watertown, Wethersfield, and New Haven. He was born in Bluntisham-cum-Earith...
Another 55 words (4 lines of text) are included under the topic Early Zealy Notables in all our PDF Extended History products and printed products wherever possible.

Zealy migration to the United States +

Early North American records indicate many people bearing the name Zealy were among those contributors:

Zealy Settlers in United States in the 18th Century