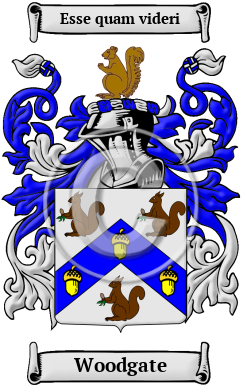 Early Origins of the Woodgate family

The surname Woodgate was first found in Kent where this distinguished Anglo Saxon Kentish family have been seated in the county of Kent since about the year 1200 where, strangely, one of the first spellings of the name was Wdegat or Wdegate and was from a residence near the gate of a wood. [1]

Early History of the Woodgate family

This web page shows only a small excerpt of our Woodgate research. Another 131 words (9 lines of text) covering the years 1586, 1618, 1651, 1700, 1726 and 1828 are included under the topic Early Woodgate History in all our PDF Extended History products and printed products wherever possible.

More information is included under the topic Early Woodgate Notables in all our PDF Extended History products and printed products wherever possible.

Woodgate migration to the United States +

Woodgate Settlers in United States in the 17th Century

Woodgate Settlers in United States in the 18th Century

Woodgate Settlers in United States in the 19th Century

Woodgate Settlers in Australia in the 19th Century

Woodgate Settlers in New Zealand in the 19th Century