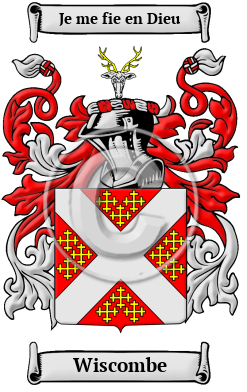 The name Wiscombe came to England with the ancestors of the Wiscombe family in the Norman Conquest of 1066. The Wiscombe family lived in Berkshire, at Windsor Castle. Interestingly, "The Stanwell family claim descent from Walter Fitz-Other (fl. 1087), who held that manor at the time of Domesday Book and was warder of Windsor Castle, whence he derived the name Windsor. His third son, Gerald de Windsor (fl. 1116), was constable of Pembroke Castle, and steward to Arnulf, Earl of Pembroke, in whose service he saw much fighting in Pembroke. He was sent to King Murtagh in Ireland to ask his daughter's hand for Arnulf, married Nest or Nesta, mistress of Henry I, and was father of William Fitzgerald, Maurice Fitzgerald (d. 1176), David (d. 1176), Bishop of St. David's, and Angharad, mother of Giraldus Cambrensis, the historian. It was from Gerald's eldest brother William that the Windsors of Stanwell claimed descent." [1]

Early Origins of the Wiscombe family

The surname Wiscombe was first found in Berkshire, where they were descended from William FitzOtho, who was son of Adalbert the second Duke of Lombardy. This Walter was given Windsor Castle by William, Duke of Normandy. His son, William Fitzwalter assumed the surname of the Castle.This was not the only time a family would assume the name of the castle as in 1917, the present Royal family would do the same.

One of the first on records of the family was Sir William de Windsor, Baron Windsor (d. 1384), Deputy of Ireland, the son of Sir Alexander de Windsor of Grayrigg, Westmorland. "No connection has been proved between this family and that of the Windsors of Stanwell. " [1]

Early History of the Wiscombe family

Multitudes of spelling variations are a hallmark of Anglo Norman names. Most of these names evolved in the 11th and 12th century, in the time after the Normans introduced their own Norman French language into a country where Old and Middle English had no spelling rules and the languages of the court were French and Latin. To make matters worse, medieval scribes spelled words according to sound, so names frequently appeared differently in the various documents in which they were recorded. The name was spelled Windsor, Winsor, Winzer, Winser, Wincer and others.

Outstanding amongst the family at this time was Sir James Windsor (c.1360), ancestor of the Earls of Plymouth, First Baron Andrew Windsor (1467-1543), a courtier and army commander, and Miles Windsore (1541-1624), a British scholar and poet. Thomas Windsor, seventh Baron Windsor of Stanwell and...
Another 43 words (3 lines of text) are included under the topic Early Wiscombe Notables in all our PDF Extended History products and printed products wherever possible.

Migration of the Wiscombe family to Ireland

Some of the Wiscombe family moved to Ireland, but this topic is not covered in this excerpt.
Another 39 words (3 lines of text) about their life in Ireland is included in all our PDF Extended History products and printed products wherever possible.

Migration of the Wiscombe family

Because of this political and religious unrest within English society, many people decided to immigrate to the colonies. Families left for Ireland, North America, and Australia in enormous numbers, traveling at high cost in extremely inhospitable conditions. The New World in particular was a desirable destination, but the long voyage caused many to arrive sick and starving. Those who made it, though, were welcomed by opportunities far greater than they had known at home in England. Many of these families went on to make important contributions to the emerging nations of Canada and the United States. Analysis of immigration records indicates that some of the first North American immigrants bore the name Wiscombe or a variant listed above: Robert Windsor, who came to Boston in 1631; Joshua Windsor, who arrived in Providence, Rhode Island in 1638; Marthah Windsor, who came to Nevis in 1660.