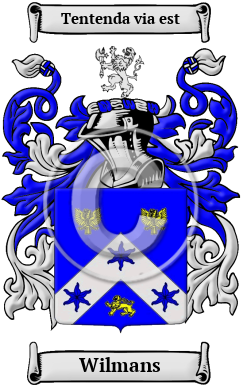 The ancient Anglo-Saxon culture of England produced the name of Wilmans. It was given to a wild man. A broad and miscellaneous class of surnames, nickname surnames referred to a characteristic of the first person who used the name. They can describe the bearer's favored style of clothing, appearance, habits, or character.

Early Origins of the Wilmans family

The surname Wilmans was first found in Berkshire where they held a family seat from very ancient times and were Lords of the manor of Beaucot, before and after the Norman Conquest in 1066. Some of the first records of the name include John Wildeman who was listed on the Close Rolls during the reign of King Richard II, which lasted from 1377 to 1399 and the Yorkshire Poll Tax Rolls of 1379 lists Willelmus Wyldman.

Early History of the Wilmans family

This web page shows only a small excerpt of our Wilmans research. Another 56 words (4 lines of text) covering the years 1621, 1693, 1646, 1647 and 1647 are included under the topic Early Wilmans History in all our PDF Extended History products and printed products wherever possible.

One relatively recent invention that did much to standardize English spelling was the printing press. However, before its invention even the most literate people recorded their names according to sound rather than spelling. The spelling variations under which the name Wilmans has appeared include Wildman, Wyldman, Wileman and others.

Notables of this surname at this time include: Sir John Wildman (c. 1621-1693), an English soldier and politician. "He seems to have served for a time in Sir Thomas Fairfax's lifeguards, probably about 1646, as it is hinted that he was not one of that body in the days of fighting, and had certainly ceased to belong to it by the autumn of 1647. In the autumn of 1647, when the soldiers of...
Another 72 words (5 lines of text) are included under the topic Early Wilmans Notables in all our PDF Extended History products and printed products wherever possible.

Migration of the Wilmans family

At this time, the shores of the New World beckoned many English families that felt that the social climate in England was oppressive and lacked opportunity for change. Thousands left England at great expense in ships that were overcrowded and full of disease. A great portion of these settlers never survived the journey and even a greater number arrived sick, starving, and without a penny. The survivors, however, were often greeted with greater opportunity than they could have experienced back home. These English settlers made significant contributions to those colonies that would eventually become the United States and Canada. An examination of early immigration records and passenger ship lists revealed that people bearing the name Wilmans arrived in North America very early: John Wildman settled in New England in 1767; Richard Wildman settled in Maryland in 1775.

Motto: Tentenda via est
Motto Translation: The way must be tried.