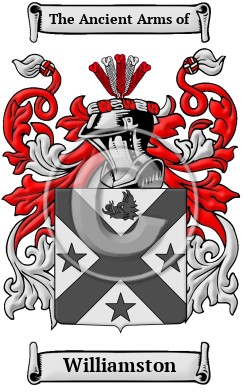 History reveals the roots of the Williamston family name in the ancient Strathclyde people of the Scottish/English Borderlands. It is derived from the Norman personal name William. The name literally was derived from the patronymic expression son of William.

Early Origins of the Williamston family

The surname Williamston was first found in Peebles, where Johannes filius Wilelmi, the Latin form of the name, is found in 1317. "Adam, son of William, rendered to Exchequer the accounts of the burgh of Peebles in 1343, and John, the son of William, was bailie there in 1365. Ion Willameson of Angus was on assize of the marches of Woodwrae in 1388, John Willelmi was official of Brechin in 1434, and Alexander Willyamsone, a native of Aberdeen, and John Williamson, born at Euchemartyn , received letters of denization in England in 1463 and 1480. 'Jhone Williamson and Donald Willeam Allanson his bruder' are witnesses to a bond in 1527. Thomas Williamson was an archer of the guard in the reign of Charles VIII (1485-98). The surname is also spelled in France D'Oillençon, and the families of this name preserve their old motto 'Venture and win.' " [1]

Early History of the Williamston family

Scribes in Medieval Scotland spelled names by sound rather than any set of rules, so an enormous number of spelling variations exist in names of that era. Williamston has been spelled Williamson, Wiliamson, Williamsone and others.

Notable amongst the family at this time was David Williamson, (c. 1634-1706) a Scottish minister and Covenanter who served as moderator of the General Assembly of the Church of Scotland in 1702. He is notable for his long association with Edinburgh's West Kirk, his seven marriages, and his portrayal in the traditional song "Dainty Davie". He is said to have buried six wives and the seventh buried him. During his time as an outlaw, he escaped capture many times, most notably by hiding in bed with Jean Kerr of Cherrytrees, who became the third of his seven wives. Peter Williamson (1730-1799)...
Another 287 words (20 lines of text) are included under the topic Early Williamston Notables in all our PDF Extended History products and printed products wherever possible.

Migration of the Williamston family to Ireland

Some of the Williamston family moved to Ireland, but this topic is not covered in this excerpt.
Another 61 words (4 lines of text) about their life in Ireland is included in all our PDF Extended History products and printed products wherever possible.

Migration of the Williamston family

The number of Strathclyde Clan families sailing for North America increased steadily as the persecution continued. In the colonies, they could find not only freedom from the iron hand of the English government, but land to settle on. The American War of Independence allowed many of these settlers to prove their independence, while some chose to go to Canada as United Empire Loyalists. Scots played essential roles in the forging of both great nations. Among them: Michael Williamson, who settled in Massachusetts in 1631; James Williamson, who settled in Virginia in 1654 along with Isaac, Richard, Alice, and Ann.