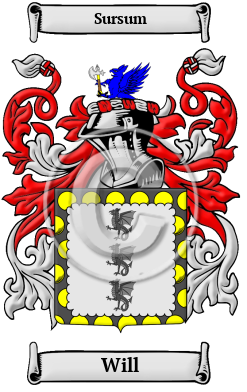 The family name Will is derived from the ancient Germanic personal name William, which itself comes from the roots will, meaning will or desire, and helm, meaning protection.

Early Origins of the Will family

The surname Will was first found in Cornwall where they held a family seat at Saltash from very ancient times.

"The house belonging to the rectorial estate is called Polgarran, or Polgorran, and was about a century since a seat of the family of Wills, who were lessees of the rectory. This house was rebuilt by Mr. Anthony Wills, who being embarrassed in his circumstances, quitted the parish, and with his six or seven sons, presented himself to the Prince of Orange at Torbay, offering them all as soldiers in his army. Their services being accepted, they conducted themselves with so much prudence, fidelity, and valour, that they all acquired the dignity of captains, and some among them became majors or colonels. One in particular, was made a standing major of the field, and was afterwards, in 1714, made principal commander of the army and troops of horse, against the Pretender at Preston, in Lancashire. For his valour and achievements he was created a Baronet of England, and general of all the land forces in the kingdom. On the death of Mrs. Wills, widow, this estate fell into the hands of the bishop, who leased it out to Mrs. Dorothy Crewys. The name of Wills is still well known in this parish; but whether these belong to the family before mentioned, it is difficult to say." [1]

Early History of the Will family

This web page shows only a small excerpt of our Will research. Another 77 words (6 lines of text) covering the years 1620, 1666, 1741, 1698 and are included under the topic Early Will History in all our PDF Extended History products and printed products wherever possible.

Cornish surnames are characterized by a multitude of spelling variations. The frequent changes in surnames are due to the fact that the Old and Middle English languages lacked definite spelling rules. The official court languages, which were Latin and French, were also influential on the spelling of a surname. Since the spelling of surnames was rarely consistent in medieval times, and scribes and church officials recorded names as they sounded rather than adhering to any specific spelling rules, it was common to find the same individual referred to with different spellings of their surname in the ancient chronicles. Moreover, a large number of foreign names were brought into England, which accelerated and accentuated the alterations to the spelling of various surnames. Lastly, spelling variations often resulted from the linguistic differences between the people of Cornwall and the rest of England. The Cornish spoke a unique Brythonic Celtic language which was first recorded in written documents during the 10th century. However, they became increasingly Anglicized, and Cornish became extinct as a spoken language in 1777, although it has been revived by Cornish patriots in the modern era. The name has been spelled Wills, Will, Wylls and others.

Early Notables of the Will family (pre 1700)

Notable amongst the family at this time was Sir Charles Wills (1666-1741), British general, son of Anthony Wills of St. Gorran, Cornwall. "His father, whose family had been settled in Cornwall since early in the sixteenth century, farmed his own land, and, having encumbered his estate with debts, quitted the same at the revolution...
Another 53 words (4 lines of text) are included under the topic Early Will Notables in all our PDF Extended History products and printed products wherever possible.

Migration of the Will family to Ireland

Some of the Will family moved to Ireland, but this topic is not covered in this excerpt.
Another 52 words (4 lines of text) about their life in Ireland is included in all our PDF Extended History products and printed products wherever possible.

Will migration to the United States +

Research into the origins of individual families in North America has revealed records of the immigration of a number of people bearing the name Will or a variant listed above:

Will Settlers in United States in the 18th Century

Will Settlers in United States in the 19th Century

Will Settlers in United States in the 20th Century

Will migration to Canada +

Will Settlers in Canada in the 18th Century

Will Settlers in Canada in the 19th Century

Will migration to Australia +

Will Settlers in Australia in the 19th Century

Will migration to New Zealand +

Will Settlers in New Zealand in the 19th Century

Historic Events for the Will family +