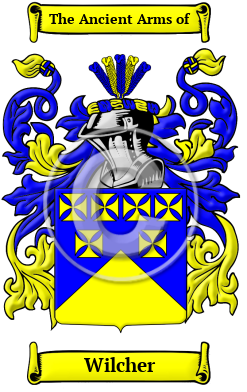 The ancestors of the name Wilcher date back to the days of the Anglo-Saxon tribes of Britain. The name is derived from their residence in Wiltshire, a county in southwestern England. The place-name was recorded as Wiltunscir in 870, and as Wiltescire in the Domesday Book, [1] compiled in 1086. The place-name means "shire centered on Wilton." Wilton is composed of the Old English elements wilig, which means willow tree, and tun, for farmstead or enclosure. The place-name Wilton means "farm where the willow trees grow." [2]

Early Origins of the Wilcher family

The surname Wilcher was first found in Sussex where Hunfridus de Wilechier was recorded in the Pipe Rolls of 1157. The same rolls listed Hunfridus de Wilecher in 1162. In Wiltshire, Nicholas de Wiltesir was recorded in the Curia Regis Rolls of 1207 and later, Robert Wylchar was found in the Subsidy Rolls for Worcestershire in 1275. In Hampshire, John Wilteshire was listed in 1298 and in Kent, William Wylkeshire was listed in 1440. [3]

Despite the fact that the "surname is derived from a geographical locality and is 'from Wiltshire,'" [4] the name was widespread by the 13th century. The Hundredorum Rolls of 1273 included Michael de Wyltesire, Cambridgeshire; William de Wyltesyre, Somerset; Roger de Wilteschire, Salop (Shropshire). The Writs of Parliament includes an entry for Almaric de Wilteshire, 1313 but no county is given. [4]

Early History of the Wilcher family

Wilcher has been spelled many different ways. Before English spelling became standardized over the last few hundred years, spelling variations in names were a common occurrence. As the English language changed in the Middle Ages, absorbing pieces of Latin and French, as well as other languages, the spelling of people's names also changed considerably, even over a single lifetime. Many variations of the name Wilcher have been found, including Wiltshire, Wiltshear, Wiltsheir and others.

Distinguished members of the family include Sir John Wiltshire of Stone Castle, Kent. His daughter Bridget Wiltshire (later, Wingfield, then Hervey, then Tyrwhitt; died 1534) was a neighbour, close friend and lady-in-waiting to Anne Boleyn, the second wife of Henry VIII of England. She was the wife of Sir Richard Wingfield (widower of Catherine Woodville.) Ironically, a letter written...
Another 59 words (4 lines of text) are included under the topic Early Wilcher Notables in all our PDF Extended History products and printed products wherever possible.

In the United States, the name Wilcher is the 6,570th most popular surname with an estimated 4,974 people with that name. [5]

Migration of the Wilcher family

In an attempt to escape the chaos experienced in England, many English families boarded overcrowded and diseased ships sailing for the shores of North America and other British colonies. Those families hardy enough, and lucky enough, to make the passage intact were rewarded with land and a social environment less prone to religious and political persecution. Many of these families became important contributors to the young colonies in which they settled. Early immigration and passenger lists have documented some of the first Wilchers to arrive on North American shores: John Wiltshire, who arrived in Virginia in 1654; George Wiltshear settled in Maryland in 1742; a "widow" Wiltsheir arrived in Barbados 1679.