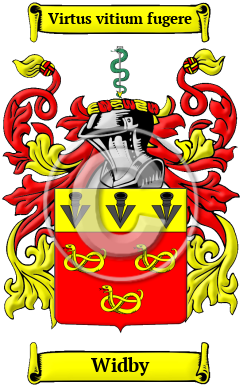 Widby is one of the names that was brought to England in the wave of migration following the Norman Conquest of 1066. The Widby family lived in Yorkshire, at Whitby. "This place was called by the Saxons Streanes-heale, which Bede interprets Sinus Phari, or "the bay of the lighthouse;" and in the Domesday Survey is styled Whitteby, or "the white town. It owes its origin to the foundation of a monastery here by Oswy, King of Northumbria, in fulfillment of a vow made prior to the battle of Winwidfield, in which he defeated and killed Penda, the pagan king of Mercia, who had invaded his territories in 655. " [1]

Early Origins of the Widby family

The surname Widby was first found in Yorkshire where they are believed to be descended from William de Percy, the most heroic of Norman nobles who held the lands of Whitby, in the East Riding of York, from 1066. He went to the first Crusade in 1096 and died at Mountjoy near Jerusalem.

Early rolls confirm Yorkshire as the first stronghold of the family as Tiece de Witebi was listed there in the Pipe Rolls of 1181. Later Thomas de Whiteby was listed in Yorkshire in 1295. [2]

Ricardus de Whiteby was listed as a Freeman of York 21-2 Edward I (during the 21st year of King Edward I's reign) and later the Yorkshire Poll Tax Rolls of 1379 included Robertas de Whytby, smyth. [3]

As one might expect, with the close proximity to Scotland, early records include: Johannes de Whitebi, Nicholaus de Whitebi, Ranulphus de Whitebi, and Robert de Whitebi who all rendered homage at Berwick to King Edward I of England in 1291. Warin de Whiteby, burgess of Perth also rendered homage to the same king in 1296, and Henry de Wyteby held land in Waldeugate, Berwick, in 1307. [4]

Early History of the Widby family

Before the advent of the printing press and the first dictionaries, the English language was not standardized. Sound was what guided spelling in the Middle Ages, so one person's name was often recorded under several variations during a single lifetime. Spelling variations were common, even among the names of the most literate people. Known variations of the Widby family name include Whitby, Whiteby and others.

Outstanding amongst the family at this time was Henry Whitby who held the lands in Berwick in 1307; Edward Whitby (died 1639), an English lawyer and politician, Member of Parliament for City of Chester (1614-1629); Daniel Whitby (1638-1726), a controversial English theologian and...
Another 42 words (3 lines of text) are included under the topic Early Widby Notables in all our PDF Extended History products and printed products wherever possible.

Migration of the Widby family

To escape the political and religious chaos of this era, thousands of English families began to migrate to the New World in search of land and freedom from religious and political persecution. The passage was expensive and the ships were dark, crowded, and unsafe; however, those who made the voyage safely were encountered opportunities that were not available to them in their homeland. Many of the families that reached the New World at this time went on to make important contributions to the emerging nations of the United States and Canada. Research into various historical records has revealed some of first members of the Widby family to immigrate North America: Daniel Whitby settled in Virginia in 1623; along with Richard; Henry Whitby settled in Maryland in 1684; Kath Whitby settled in Virginia in 1654; James Whitby arrived in Philadelphia, Pa. in 1808.