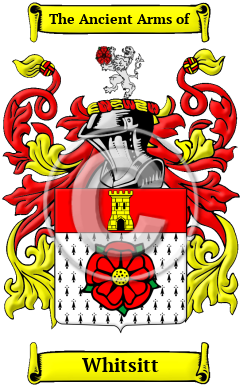 Early Origins of the Whitsitt family

The surname Whitsitt was first found in Lanarkshire (Gaelic: Siorrachd Lannraig) a former county in the central Strathclyde region of Scotland, now divided into the Council Areas of North Lanarkshire, South Lanarkshire, and the City of Glasgow, where they held a family seat on the lands of Whiteside from very early times. [1]

Further south in England, records there show Richard Whitside, Cambridgeshire in the Hundredorum Rolls of 1273 and Willelmus Whitesyde in the Yorkshire Poll Tax Rolls of 1379. [2]

Early History of the Whitsitt family

Spelling variations of this family name include: Whiteside, Whitesides and others.

Notable amongst the family at this time was James Whiteside (1804-1876), Lord Chief Justice of Ireland, born on 12 Aug. 1804 at Delgany, co. Wicklow, of which parish his father, William Whiteside, was curate. Shortly after Whiteside's birth his father moved to Rathmines, near Dublin, where he died in 1806. He entered Trinity College, Dublin, in 1822, and graduated B.A. in 1832. In 1829...
Another 63 words (4 lines of text) are included under the topic Early Whitsitt Notables in all our PDF Extended History products and printed products wherever possible.

Migration of the Whitsitt family to Ireland

Some of the Whitsitt family moved to Ireland, but this topic is not covered in this excerpt.
Another 112 words (8 lines of text) about their life in Ireland is included in all our PDF Extended History products and printed products wherever possible.

Whitsitt migration to the United States +

Whitsitt Settlers in United States in the 20th Century