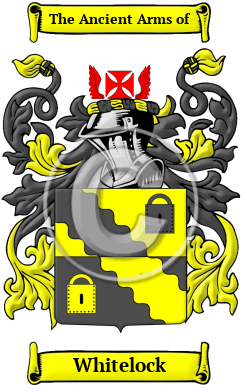 The name Whitelock comes from the ancient Anglo-Saxon culture of Britain. It was a name for a person with white hair. Looking back further, we find the name Whitelock was derived from the Old English words whit, meaning white and lock, meaning tress or hair. [1] [2]

Early Origins of the Whitelock family

The surname Whitelock was first found in Devon, but much later "the Whitlocks were best represented in the Halstead [Essex] district." [3]

The Hundredorum Rolls of 1273 has only two listings for the family with very early spellings: Emma filius Witlok, Huntingdonshire; and William Witlohc, Oxfordshire. [4]

Kirby's Quest also had two early entries for the family in Somerset: William atte Whytelak and Walter Whytelock. Both were "1 Edward III," in other words entered in the first year of King Edward III's reign. [5]

Much further to the north in Scotland, "Th Quhyteloke" was Burgess of Edinburgh in 1403 and Robert Quhytlok was a tenant under the Abbey of Kelso in 1567. [6]

Early History of the Whitelock family

Notables of the family at this time include Edmund Whitelocke (1565-1608), English courtier, born in the parish of St. Gabriel, Fenchurch Street, London, on 10 Feb. 1564, the eldest son of Richard Whitelocke, merchant. His youngest brother, Sir James Whitelocke SL (1570-1632), was an English judge and politician who sat in the House of Commons between 1610 and 1622. [7] His son, Sir Bulstrode Whitelocke (1605-1675), was an English lawyer...
Another 69 words (5 lines of text) are included under the topic Early Whitelock Notables in all our PDF Extended History products and printed products wherever possible.

Migration of the Whitelock family to Ireland

Some of the Whitelock family moved to Ireland, but this topic is not covered in this excerpt. More information about their life in Ireland is included in all our PDF Extended History products and printed products wherever possible.

Whitelock migration to the United States +

To escape the unstable social climate in England of this time, many families boarded ships for the New World with the hope of finding land, opportunity, and greater religious and political freedom. Although the voyages were expensive, crowded, and difficult, those families that arrived often found greater opportunities and freedoms than they could have experienced at home. Many of those families went on to make significant contributions to the rapidly developing colonies in which they settled. Early North American records indicate many people bearing the name Whitelock were among those contributors:

Whitelock Settlers in United States in the 17th Century

Whitelock Settlers in United States in the 18th Century

Whitelock Settlers in Australia in the 19th Century

Whitelock Settlers in West Indies in the 18th Century