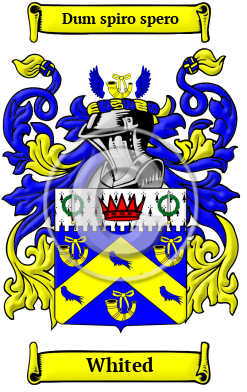 The name Whited is rooted in the ancient Anglo-Saxon culture. It was a name for someone who was a whitehaired or fair-haired person. The surname Whited is derived from the Old English words hwit, which means white, and heafod, which means head. [1]

Early Origins of the Whited family

The surname Whited was first found in Lancashire and "especially in North England. " [2]

Further to the north in Scotland, the first record of the family was "Adam Whytehevde de Hoton, juror on inquisition before the sheriff of Berwick, 1300. " [3]

Early History of the Whited family

Whited has been spelled many different ways. Before English spelling became standardized over the last few hundred years, spelling variations in names were a common occurrence. As the English language changed in the Middle Ages, absorbing pieces of Latin and French, as well as other languages, the spelling of people's names also changed considerably, even over a single lifetime. Many variations of the name Whited have been found, including Whitehedd, Whited, Whitehead, Whytehead and others.

Notables of the family at this time include David Whithead (1492?-1571), English divine, born about 1492, a native of Hampshire (Wood), where the Whiteheads had some landed property. "His contemporary, Hugh Whitehead (d. 1551), with whom David has been confused, belonged to a Durham branch of the family, was from 1519 to 1540 last prior, and from 1541 first dean of Durham. " [4] George Whitehead (1636?-1723), was an English Quaker, born at Sun Bigs, parish of Orton, Westmorland. From 1661 to 1672 Whitehead spent most of his time in prison. He died on 8 March 1723, in his eighty-seventh...
Another 98 words (7 lines of text) are included under the topic Early Whited Notables in all our PDF Extended History products and printed products wherever possible.

In the United States, the name Whited is the 3,998th most popular surname with an estimated 7,461 people with that name. [5]

Migration of the Whited family to Ireland

Some of the Whited family moved to Ireland, but this topic is not covered in this excerpt.
Another 32 words (2 lines of text) about their life in Ireland is included in all our PDF Extended History products and printed products wherever possible.

Whited migration to the United States +

In an attempt to escape the chaos experienced in England, many English families boarded overcrowded and diseased ships sailing for the shores of North America and other British colonies. Those families hardy enough, and lucky enough, to make the passage intact were rewarded with land and a social environment less prone to religious and political persecution. Many of these families became important contributors to the young colonies in which they settled. Early immigration and passenger lists have documented some of the first Whiteds to arrive on North American shores:

Whited Settlers in United States in the 20th Century