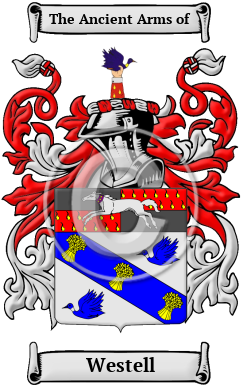 Early Origins of the Westell family

The surname Westell was first found in Wasdale, or Nether Wasdale, a chapelry, in the parish of St. Bees, union of Whitehaven in Cumberland. Wasdale-Head is a chapelry, nit far from Wasdale. [1]

Early History of the Westell family

Distinguished members of the family include Robert Wastell (fl. 1406-1410) from Totnes, Devon, an English politician, Member of the Parliament for Totnes in 1406 and 1410; and John Wastell (1460-1515), English Gothic architect responsible for Manchester Cathedral, parts of King's College Chapel, Cambridge, the crossing tower (Bell Harry Tower) of Canterbury Cathedral, and the fan vaulted section of Peterborough Cathedral. Simon Wastell (died 1632), was a...
Another 66 words (5 lines of text) are included under the topic Early Westell Notables in all our PDF Extended History products and printed products wherever possible.

Westell migration to the United States +

Westell Settlers in United States in the 18th Century

Westell Settlers in United States in the 19th Century

Westell Settlers in West Indies in the 18th Century

Historic Events for the Westell family +