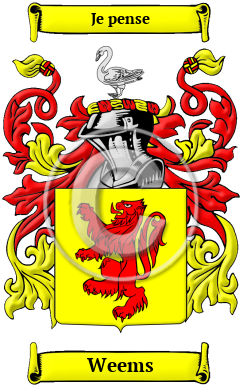 Early Origins of the Weems family

The surname Weems was first found in Fife, where they held a family seat from very ancient times as Lords of the Castle of Wemyss, so named from the Gaelic word Uamch (a cave) derived from the lands and cliffs in which caves abound on the seashore.

Early History of the Weems family

Spelling variations of this family name include: Wemyss, Weems, Wemys, Wemes and others.

Notable amongst the Clan at this time was John Weemes (Weemse, Wemyss) (c.1579-1636), a minister at Church of Scotland, Hebrew scholar and exegete, educated at the University of St Andrews, appointed minister of Hutton, Berwickshire in 1608; John Wemyss (died 1649), the 1st Earl of Wemyss and Lord High Commissioner to the...
Another 51 words (4 lines of text) are included under the topic Early Weems Notables in all our PDF Extended History products and printed products wherever possible.

In the United States, the name Weems is the 2,945th most popular surname with an estimated 9,948 people with that name. [1]

Migration of the Weems family to Ireland

Some of the Weems family moved to Ireland, but this topic is not covered in this excerpt.
Another 32 words (2 lines of text) about their life in Ireland is included in all our PDF Extended History products and printed products wherever possible.

Weems migration to the United States +

Weems Settlers in United States in the 19th Century

Weems Settlers in United States in the 20th Century