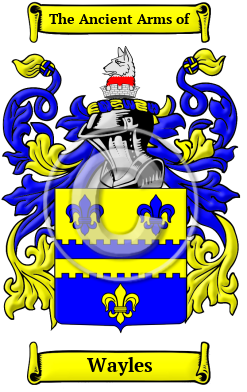 The present generation of the Wayles family is only the most recent to bear a name that dates back to the ancient Anglo-Saxon culture of Britain. Their name comes from having lived near a stone-built wall. Wayles is a local surname, which belongs to the category of hereditary surnames. Other types of local surnames include topographic surnames, which could be given to a person who lived beside any physical feature, such as a hill, stream, church or type of tree. Habitation names form the other broad category of surnames that were derived from place-names. They were derived from pre-existing names for towns, villages, parishes, or farmsteads. Other local names are derived from the names of houses, manors, estates, regions, and entire counties. The surname Wayles referred to a person who lived beside a large stone wall, which was used either for the purpose of fortification, or to keep back the encroachment of the sea. Members of the Wayles family were established in Gloucestershire prior to the Norman Conquest of England, in 1066. By the time of the Conquest, they were major landholders in that county.

Early Origins of the Wayles family

The surname Wayles was first found in Gloucestershire where they held a family seat from very ancient times and appeared as holders of lands in the Domesday Book compiled in 1086 by King William of England. The name was from the Anglo Saxon Wal, meaning a stranger. Wales is a parish, in the union of Worksop, S. division of the wapentake of Strafforth and Tickhill in the West Riding of Yorkshire. "This parish, in the Domesday Survey called Walise, belonged to Morcar, Earl of Northumberland, in the reign of Edward the Confessor." [1]

Early History of the Wayles family

Until the dictionary, an invention of only the last few hundred years, the English language lacked any comprehensive system of spelling rules. Consequently, spelling variations in names are frequently found in early Anglo-Saxon and later Anglo-Norman documents. One person's name was often spelled several different ways over a lifetime. The recorded variations of Wayles include Wall, Walls, Wale, Walles and others.

Distinguished members of the family include Sir Thomas Wale (1303-1352), an English soldier and co-founder of the Knight of the Garter; William de Wall, the knight who accompanied Strongbow; Saint John Wall, O.F.M., (1620-1679), an English Catholic Franciscan friar, apprehended under suspicion of being a party to the Titus Oates plot, was executed and later honored...
Another 55 words (4 lines of text) are included under the topic Early Wayles Notables in all our PDF Extended History products and printed products wherever possible.

Migration of the Wayles family to Ireland

Some of the Wayles family moved to Ireland, but this topic is not covered in this excerpt.
Another 80 words (6 lines of text) about their life in Ireland is included in all our PDF Extended History products and printed products wherever possible.

Migration of the Wayles family

Thousands of English families boarded ships sailing to the New World in the hope of escaping the unrest found in England at this time. Although the search for opportunity and freedom from persecution abroad took the lives of many because of the cramped conditions and unsanitary nature of the vessels, the opportunity perceived in the growing colonies of North America beckoned. Many of the settlers who survived the journey went on to make important contributions to the transplanted cultures of their adopted countries. The Wayles were among these contributors, for they have been located in early North American records: John Walls, a servant, who settled in Argentia, Newfoundland in 1773; Phillip Walls was a fisherman of Petty Harbour, Newfoundland in 1745; William Walls settled in Annapolis Maryland in 1758.