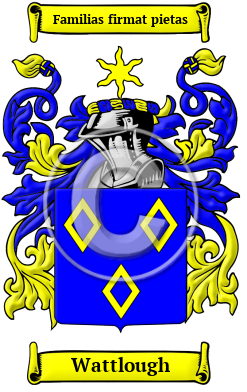 Early Origins of the Wattlough family

The surname Wattlough was first found in Inverness-shire (Gaelic: Siorrachd Inbhir Nis) divided between the present day Scottish Council Areas of Highland and Western Isles, and consisting of a large northern mainland area and various island areas off the west coast, the shire was anciently both a Pictish and Norwegian stronghold, where they are believed to be descended from John Biset, son of Henry Biset, Lord of Cany in Normandy, who became a Norman Lord of the Aird at Bewley near Inverness. However, there seems to be no evidence of the existence of "Wardlaws of the Ilk."

There is a place named Wardlaw, near Beauly which has existed as early as 1210 when it was recorded as Wardelaue.

As far the surname goes, Henricus de Wardlaw, was the first on record to use the name. He received a charter from Robert the Bruce in 1330, for half of the Barony of Wiltone in Roxburghshire. [1]

Wardlow is a parish and linear village in the Derbyshire Dales and within the parish lies Warlow Mires, a small hamlet. The parish has always had a rather small population as seen in a census in the late 1800s showing only 171 people. The parish dates back to 1258 when it was listed as Wardelawe, and literally meant "watch or look-out hill" derived from the Old English weard + hlaw [2]

Early History of the Wattlough family

Spelling variations of this family name include: Wardlaw, Wardlawe, Wardlow, Wadlow, Wadley and others.

Notable among the family at this time was Walter Wardlaw (c. 1387), son of a Sir Henry Wardlaw of Torry, Bishop of Glasgow (1367-1387); Henry Wardlaw (died 1440), Bishop of St Andrews and founder of the University of St Andrews; and Elizabeth Wardlaw (1677-1727), Lady Wardlaw, reputed author of the poem "Hardyknute." The Wardlaw Baronetcy, of Pitreavie, County of Fife, is a title in the Baronetage of Nova Scotia that was created on 5 March 1631...
Another 74 words (5 lines of text) are included under the topic Early Wattlough Notables in all our PDF Extended History products and printed products wherever possible.

Migration of the Wattlough family to Ireland

Some of the Wattlough family moved to Ireland, but this topic is not covered in this excerpt.
Another 60 words (4 lines of text) about their life in Ireland is included in all our PDF Extended History products and printed products wherever possible.

Migration of the Wattlough family

Some of the first settlers of this family name or some of its variants were: James and Samuel Wardlaw who arrived in Philadelphia in 1843; Henry Wardlo settled in Barbados in 1628; William Wardlow settled in Maryland in 1735; R. Wardilow settled in New York in 1822..