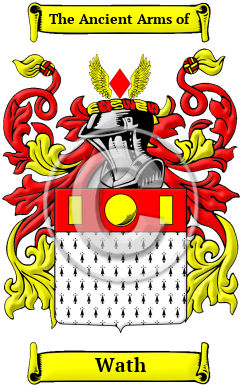 The surname Wath was derived from the common given name Watt, which was a short form of Walter. "Walter being one of the great fontal names of the 13th and 14th centuries, and Wat being the popular nick., it can scarcely be a matter for surprise that Watts and Watson are two of our most familiar surnames." [1]

Early Origins of the Wath family

The surname Wath was first found in Worcestershire where they held a family seat from early times, and were descended from Simon Wathes, a soldier of fortune, who accompanied King Stephen into England in the year 1135.

Early History of the Wath family

This web page shows only a small excerpt of our Wath research. Another 89 words (6 lines of text) covering the years 1511, 1615, 1446, 1674, 1748 and are included under the topic Early Wath History in all our PDF Extended History products and printed products wherever possible.

Another 28 words (2 lines of text) are included under the topic Early Wath Notables in all our PDF Extended History products and printed products wherever possible.

Migration of the Wath family to Ireland

Some of the Wath family moved to Ireland, but this topic is not covered in this excerpt.
Another 59 words (4 lines of text) about their life in Ireland is included in all our PDF Extended History products and printed products wherever possible.

Wath migration to the United States +

Wath Settlers in United States in the 17th Century