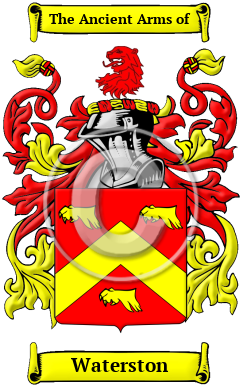 Early Origins of the Waterston family

The surname Waterston was first found in Ross-shire, Scotland where they held the lands of Waterson in the parish of Fern (Fearn) in that shire from very ancient times. Wether Hill is located in Dumfries and Galloway, near New Galloway, Scotland; near Perth and near Penrith, England.

Early History of the Waterston family

This web page shows only a small excerpt of our Waterston research. Another 73 words (5 lines of text) covering the years 1359, 1495, 1594, 1929, 1585, 1634, 1656 and are included under the topic Early Waterston History in all our PDF Extended History products and printed products wherever possible.

Spelling variations of this family name include: Waterson, Watersone, Waterston, Watherston and many more.

Notable amongst the family name during their early history was Edward Waterson (died 1594), English Catholic priest and martyr, beatified in 1929; Simon Waterson (1585-1634) a London prominent publisher of Edmund...
Another 30 words (2 lines of text) are included under the topic Early Waterston Notables in all our PDF Extended History products and printed products wherever possible.

Migration of the Waterston family to Ireland

Some of the Waterston family moved to Ireland, but this topic is not covered in this excerpt.
Another 57 words (4 lines of text) about their life in Ireland is included in all our PDF Extended History products and printed products wherever possible.

Waterston migration to the United States +

Waterston Settlers in United States in the 19th Century