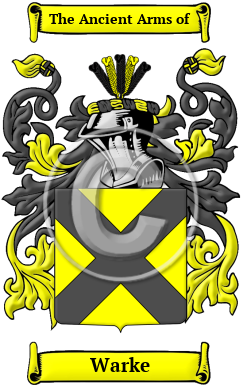 Early Origins of the Warke family

The surname Warke was first found in Northumberland where they held a family seat as Lords of the manor and Castle of Wark, from very ancient times, before the Norman Conquest, and showed allegiance to the Bishop of Durham. Henry Percy secured the Castle of Warkworth from Edward III in 1327. He was the Commander at Hallidon Hill and Nevill's Cross. Today Warkworth Castle is a ruined medieval building in Warkworth, Northumberland.

Early History of the Warke family

Spelling variations of this family name include: Wark, Warke, Warkworth and others.

Notable amongst the family name during their early history was Lord Wark of Wark Castle; and John Warkworth DD (c. 1425-1500), Master of Peterhouse, Cambridge (1473-1500), and a chronicler of Edward IV. "He was a man of unknown origin. He has been supposed to be a native of the diocese of Durham, and one John Warkworth, who...
Another 56 words (4 lines of text) are included under the topic Early Warke Notables in all our PDF Extended History products and printed products wherever possible.

Migration of the Warke family to Ireland

Some of the Warke family moved to Ireland, but this topic is not covered in this excerpt. More information about their life in Ireland is included in all our PDF Extended History products and printed products wherever possible.

Warke migration to the United States +

Warke Settlers in United States in the 19th Century