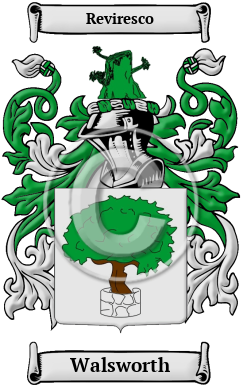 Early Origins of the Walsworth family

The surname Walsworth was first found in Fife where they had been anciently seated in the lands of Wellwood in the parish of Dunfermline. They were anciently from Denmark and retained their connection with Danish royalty. Early records show William Welwood was Lord Chancellor of Ireland (1245–1259).

Early History of the Walsworth family

This web page shows only a small excerpt of our Walsworth research. Another 125 words (9 lines of text) covering the years 1820, 1578, 1622, 1652, 1727, 1679 and 1690 are included under the topic Early Walsworth History in all our PDF Extended History products and printed products wherever possible.

Spelling variations of this family name include: Wellwood, Wellwoode, Waldwood, Welwood and others.

Notable amongst the family name during their early history was William Wellwood or Welwood (fl. 1578-1622), Scottish professor of mathematics and law at St. Andrews University. He was "born in Scotland, and probably a native of St. Andrews, where many of his kindred dwelt. " [1] James Wellwood (1652-1727), was an English physician, son of Robert...
Another 55 words (4 lines of text) are included under the topic Early Walsworth Notables in all our PDF Extended History products and printed products wherever possible.

Walsworth Settlers in Australia in the 19th Century