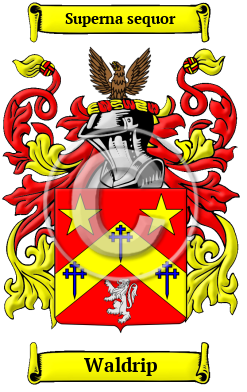 The surname Waldrip is thought to have emerged in the borderland region between Northern England and Scotland. The name is derived from the Old Norman "warderobe," a name given to an official of the wardrobe, and was most likely first borne by someone who held this distinguished position. [1]

Early Origins of the Waldrip family

The surname Waldrip was first found in Scotland, where Robertus de Warderob witnessed a charter by Countess Margaret of Buchan in favor of the Abbey of Arbroath in 1210. "John de Wardroba laid claim to certain lands in Kilpatrick, Dumbartonshire, c. 1270, and Randinus de Warderoba witnessed a quitclaim of Beeth Waldef in Fife, 1278. Alisaundre de la Garderobe of Edinburghshire and David de la Garderobe of Fife rendered homage [to King Edward I of England] in 1296. John de Gardropa was appointed proluctor in Aberdeen, 1317, and Adam de Gardropa confirmed the transfer of lands to John Crab there in 1351. Thomas Vardrop de Gothynys acquired a fourth part of Thenstoun, 1450, and in 1465 as Thomas Wardropare de Gothnys he had a charter of confirmation of the lands of Thanystoune in the thanage of Kintore. Alexander Wardroper and James Wardroper witnessed a charter of lands in Scone, 1491." [2]

Early History of the Waldrip family

Notable amongst the family name during their early history was John Wardrop of Kilpatrick, scion of the family, and James Wardrop (1782-1869), a prominent Scottish surgeon who was known for his "Essays on the Morbid Anatomy of the Human Eye," as well as for his extraordinary surgical skills. He was " the youngest child of James Wardrop (1738-1830) by his wife Marjory, daughter of Andrew Marjoribanks of Marjoribanks, was born on 14 Aug. 1782 at Torbane Hill, a small property which had belonged to his forefathers for many generations. It adjoined the parish celebrated as the birthplace of the Hunters and...
Another 332 words (24 lines of text) are included under the topic Early Waldrip Notables in all our PDF Extended History products and printed products wherever possible.

Migration of the Waldrip family

Some of the first settlers of this family name or some of its variants were: James Wardrope, who settled in New Jersey in 1685; Joseph Wardrope, who immigrated to Georgia in 1734 with his wife and daughter, Henry Wardrop, who was listed as a runaway convict, servant, or apprentice in Philadelphia in 1752.