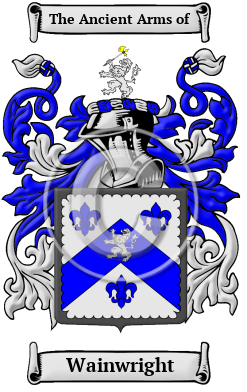 The ancient name of Wainwright finds its origins with the ancient Anglo-Saxon culture of Britain. It comes from a name for a wainwright or wagon builder. The surname Wainwright is derived from the Old English word wægnwyrhta, which means wainwright. [1] [2]

"Wain is an old, but nearly obsolete, word for wagon. In Sussex, a shed in which wagons stand is called a wain-house or ' wen-hus,' and in some parts of England a wagoner is called a wain-man, whence the surname Wenman. Nor must we forget the constellation, Charles's Wain. A Wainwright was therefore synonymous with Cartwright and Wheelwright, also English surnames, and signified a builder of wagons." [1]

Early Origins of the Wainwright family

The surname Wainwright was first found in Worcestershire where they were Lords of the manor of Dudelei from very ancient times, and it is possible that they are interrelated with the Norman Baron William FitzAnsculf whose castle was in Dudley.

Early History of the Wainwright family

This web page shows only a small excerpt of our Wainwright research. Another 75 words (5 lines of text) covering the years 1568, 1577, 1678 and 1592 are included under the topic Early Wainwright History in all our PDF Extended History products and printed products wherever possible.

Sound was what guided spelling in the essentially pre-literate Middle Ages, so one person's name was often recorded under several variations during a single lifetime. Also, before the advent of the printing press and the first dictionaries, the English language was not standardized. Therefore, spelling variations were common, even among the names of the most literate people. Known variations of the Wainwright family name include Wainwright, Waynewright, Wainright, Wayn and others.

Another 28 words (2 lines of text) are included under the topic Early Wainwright Notables in all our PDF Extended History products and printed products wherever possible.

Wainwright migration to the United States +

For political, religious, and economic reasons, thousands of English families boarded ships for Ireland, the Canadas, the America colonies, and many of smaller tropical colonies in the hope of finding better lives abroad. Although the passage on the cramped, dank ships caused many to arrive in the New World diseased and starving, those families that survived the trip often went on to make valuable contributions to those new societies to which they arrived. Early immigrants bearing the Wainwright surname or a spelling variation of the name include :

Wainwright Settlers in United States in the 17th Century

Wainwright Settlers in United States in the 18th Century

Wainwright Settlers in United States in the 19th Century

Wainwright Settlers in Australia in the 19th Century

Wainwright Settlers in New Zealand in the 19th Century

Historic Events for the Wainwright family +