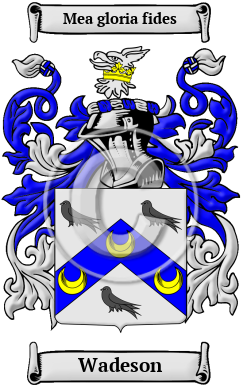 The Wadeson family name is linked to the ancient Anglo-Saxon culture of Britain. Their name comes from Wat, which is a diminutive form of Walter. This Old German name, which literally means mighty army, was introduced into England during the reign of Edward the Confessor and became one of the most popular personal names in that country following the Norman Conquest of 1066. The surname also features the suffix -son, which superseded other patronymic suffixes in popularity during the 14th century and was most popular in the north of England.

Early Origins of the Wadeson family

The surname Wadeson was first found in the county of Rutland, where they were Lords of the manor of Rockingham, from ancient times. This was home to "a castle was erected by William I., on the summit of a hill, for the protection of the extensive iron-works at that time carried on in the adjacent woodlands. During the war in the reign of Charles I., the castle was garrisoned for the king by Sir Lewis Watson, afterwards created Lord Rockingham, and was besieged by the parliamentarian forces, who at the same time destroyed the tower and part of the nave of the church: the only remains of the castle are the two massive bastions that defended the entrance gateway." [1]

Early History of the Wadeson family

Until the dictionary, an invention of only the last few hundred years, the English language lacked any comprehensive system of spelling rules. Consequently, spelling variations in names are frequently found in early Anglo-Saxon and later Anglo-Norman documents. One person's name was often spelled several different ways over a lifetime. The recorded variations of Wadeson include Wattson, Walterson, MacWattie and others.

Distinguished members of the family include Earl of Rockingham; Thomas Watson (c. 1620-1686), an English, Nonconformist, Puritan preacher and author; Daniel Watson (c 1617-1683), an English lawyer and politician, Member of Parliament for Lichfield in 1659, Recorder of Newcastle-under-Lyme (1660-1683); Thomas Watson (1637-1717), an English clergyman, Bishop of St David's (1687-1699); Samuel Watson (fl. c.1687-c.1710), an associate of Isaac Newton, he invented the 5 minute repeater, made the first stopwatch and a clock for King Charles II; and Edward Watson, Viscount Sondes (1686-1722), a British Member of...
Another 86 words (6 lines of text) are included under the topic Early Wadeson Notables in all our PDF Extended History products and printed products wherever possible.

Migration of the Wadeson family to Ireland

Some of the Wadeson family moved to Ireland, but this topic is not covered in this excerpt.
Another 90 words (6 lines of text) about their life in Ireland is included in all our PDF Extended History products and printed products wherever possible.

Wadeson Settlers in Australia in the 19th Century

Wadeson Settlers in New Zealand in the 19th Century