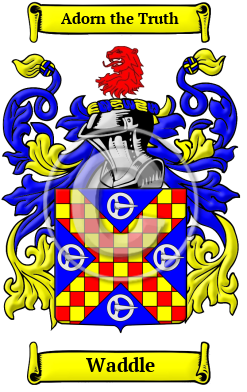 The surname Waddle comes from the place named Wedale, in the parish of Stow, near Edinburgh. As such it is a habitation name, a category of surnames derived from pre-existing names for towns, villages, parishes, or farmsteads.

Early Origins of the Waddle family

The surname Waddle was first found in Midlothian, where they had held territories at Wedale in the parish of Stow from ancient times. [1]

Early History of the Waddle family

Notable among the family at this time was John Weddell (1583-1642), sea-captain who in 1617 was master's mate of the East India Company's ship Dragon. "In April 1621 he sailed from England as captain of the Jonas, with three other...
Another 40 words (3 lines of text) are included under the topic Early Waddle Notables in all our PDF Extended History products and printed products wherever possible.

In the United States, the name Waddle is the 5,597th most popular surname with an estimated 4,974 people with that name. [4]

Migration of the Waddle family to Ireland

Some of the Waddle family moved to Ireland, but this topic is not covered in this excerpt.
Another 51 words (4 lines of text) about their life in Ireland is included in all our PDF Extended History products and printed products wherever possible.

Waddle migration to the United States +

Waddle Settlers in United States in the 17th Century

Waddle Settlers in United States in the 19th Century

Waddle Settlers in Canada in the 19th Century

Waddle Settlers in Australia in the 19th Century