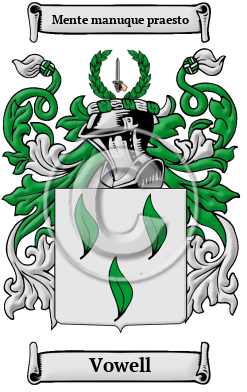 Vowell is a name whose ancestors lived among the Picts, a tribe in ancient Scotland. The Vowell family lived in the place called Foulzie in the parish of King Edward in the county of Aberdeen. The surname Vowell belongs to the category of habitation names, which are derived from pre-existing names for towns, villages, parishes, or farmsteads.

Early Origins of the Vowell family

The surname Vowell was first found in Aberdeenshire (Gaelic: Siorrachd Obar Dheathain), a historic county, and present day Council Area of Aberdeen at Foulzie. James Fowlie was listed in Bartholl Chapell in 1741. [1] Further to the south in Greenhow in the North Riding of Yorkshire, the Foulis family gained a family seat during the reign of James I. Originally held by the D'Arcys, that family had lost the lands during the reign of Henry VIII when it was reverted to the crown. [2]

Early History of the Vowell family

The appearance of the printing press and the first dictionaries in the last few hundred years did much to standardize spelling. Prior to that time scribes spelled according to sound, a practice that resulted in many spelling variations. Vowell has been spelled Fowlie, Fowley, Fowlis, Foulis and others.

Notable amongst the Clan at this time was Sir James Foulis, Lord Colinton (d. 1688), a Scottish judge; and his eldest son, James Foulis, Lord Reidfurd (1645?-1711), a Scottish judge; Henry Foulis (1638-1669), an English academic theologian and controversial author; Sir Alexander Foulis, made a Baronet June 7th 1634; Sir David Foulis, 1st Baronet Foulis was Custos Rotulorum (keeper of...
Another 59 words (4 lines of text) are included under the topic Early Vowell Notables in all our PDF Extended History products and printed products wherever possible.

In the United States, the name Vowell is the 9,489th most popular surname with an estimated 2,487 people with that name. [3]

Migration of the Vowell family to Ireland

Some of the Vowell family moved to Ireland, but this topic is not covered in this excerpt. More information about their life in Ireland is included in all our PDF Extended History products and printed products wherever possible.

Vowell migration to the United States +

The expense of the crossing to the North American colonies seemed small beside the difficulties of remaining in Scotland. It was a long and hard trip, but at its end lay the reward of freedom. Some Scots remained faithful to England and called themselves United Empire Loyalists, while others fought in the American War of Independence. Much of this lost Scottish heritage has been recovered in the last century through Clan societies and other patriotic Scottish organizations. A search of immigration and passenger lists revealed many important, early immigrants to North America bearing the name of Vowell:

Vowell Settlers in United States in the 17th Century

Vowell Settlers in Australia in the 19th Century

Vowell Settlers in New Zealand in the 19th Century

Historic Events for the Vowell family +