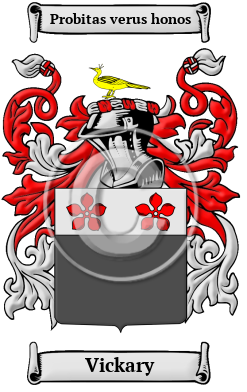 Early Origins of the Vickary family

The surname Vickary was first found in Devon. They were originally from La Vacherie, and acquired their seat at Dunkeswell in Devon soon after the Norman Conquest in 1066.

Early History of the Vickary family

This web page shows only a small excerpt of our Vickary research. Another 42 words (3 lines of text) covering the years 1490 and 1561 are included under the topic Early Vickary History in all our PDF Extended History products and printed products wherever possible.

Anglo-Norman names tend to be marked by an enormous number of spelling variations. This is largely due to the fact that Old and Middle English lacked any spelling rules when Norman French was introduced in the 11th century. The languages of the English courts at that time were French and Latin. These various languages mixed quite freely in the evolving social milieu. The final element of this mix is that medieval scribes spelled words according to their sounds rather than any definite rules, so a name was often spelled in as many different ways as the number of documents it appeared in. The name was spelled Vickare, Vickery, Vickary and others.

Outstanding amongst the family at this time was Thomas Vicary (1490-1561), an early English physician, surgeon and anatomist, born in Kent, he was, "but a meane practiser in Maidstone." Henry VIII advanced him to the position of sergeant-surgeon...
Another 37 words (3 lines of text) are included under the topic Early Vickary Notables in all our PDF Extended History products and printed products wherever possible.

Migration of the Vickary family to Ireland

Some of the Vickary family moved to Ireland, but this topic is not covered in this excerpt. More information about their life in Ireland is included in all our PDF Extended History products and printed products wherever possible.

Vickary Settlers in Australia in the 18th Century