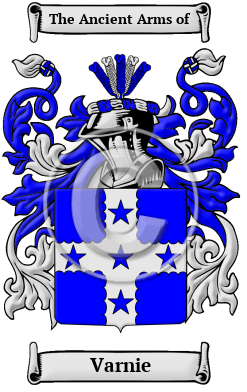 Varnie is a name that first reached England following the Norman Conquest of 1066. The Varnie family lived in "Vernai, near Bayeux, Normandy. Walter de Vernai occurs in Cambridgeshire in 1158, and Richard de Vernai in Staffordshire in the time of Richard I. The Lords Willoughby de Broke descend from William de Vernai, living 1119-1148. They were first seated at Bromshulfe in Staffordshire, and in the beginning of the fourteenth century at Madeley in Herefordshire, but as early as the reign of Henry VL we find them settled in their present home in Warwickshire." [1]

Early Origins of the Varnie family

The surname Varnie was first found in Warwickshire where in 1442 Richard de Vernay built a stately manor house at Compton-Murdack, which as Compton-Vernay, still continues to be the family seat. His grandson, another Richard, was "in such esteem with Henry VIII., that, being informed of some infirmity in his head, he granted him a special license, dated Greenwich, January 15th, 1517, to wear his bonnet at all times and in all places, as well in the King's presence as elsewhere, according to his own pleasure, without the interruption of any man whatsoever." [1]

Early History of the Varnie family

This web page shows only a small excerpt of our Varnie research. Another 136 words (10 lines of text) covering the years 1419, 1465, 1642, 1703 and 1791 are included under the topic Early Varnie History in all our PDF Extended History products and printed products wherever possible.

It is only in the last few hundred years that the English language has been standardized. For that reason, Anglo-Norman surnames like Varnie are characterized by many spelling variations. Scribes and monks in the Middle Ages spelled names they sounded, so it is common to find several variations that refer to a single person. As the English language changed and incorporated elements of other European languages such as Norman French and Latin, even literate people regularly changed the spelling of their names. The variations of the name Varnie include Varney, Verney and others.

Outstanding amongst the family at this time was Sir Edmund Verney, standard bearer to King Charles I., who fell at the battle of Edgehill in 1642. He was the father of Sir Ralph, the first Baronet, and the grandfather of Sir John, created in 1703 Baron Verney of Belturbet and Viscount of Fermanagh in Ireland. An Earldom followed...
Another 57 words (4 lines of text) are included under the topic Early Varnie Notables in all our PDF Extended History products and printed products wherever possible.

Migration of the Varnie family to Ireland

Some of the Varnie family moved to Ireland, but this topic is not covered in this excerpt. More information about their life in Ireland is included in all our PDF Extended History products and printed products wherever possible.

Migration of the Varnie family

Faced with the chaos present in England at that time, many English families looked towards the open frontiers of the New World with its opportunities to escape oppression and starvation. People migrated to North America, as well as Australia and Ireland in droves, paying exorbitant rates for passages in cramped, unsafe ships. Many of the settlers did not make the long passage alive, but those who did see the shores of North America were welcomed with great opportunity. Many of the families that came from England went on to make essential contributions to the emerging nations of Canada and the United States. Some of the first immigrants to cross the Atlantic and come to North America carried the name Varnie, or a variant listed above: E. Varney settled in Belfast, Maine, in 1822; H.J. Varney arrived in San Francisco in 1852.