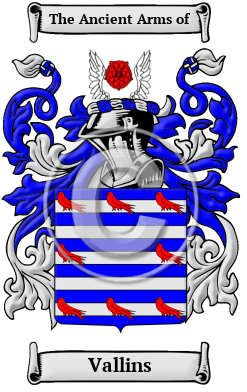 Early Origins of the Vallins family

The surname Vallins was first found in Kent, where they arrived soon after the Norman Conquest, and were descended from Roger Vallance.

Early History of the Vallins family

Notable among the family at this time was William Vallans (fl. 1578-1590), English poet, son of John Vallans, born near Ware in Hertfordshire, and afterwards carried on business as a salter. " He was a friend of Camden and other antiquaries, and himself took an interest in antiquarian matters. In 1590 he published a poem in unrhymed hexameters entitled ‘A Tale of Two Swannes,’ printed by Roger Ward for John...
Another 69 words (5 lines of text) are included under the topic Early Vallins Notables in all our PDF Extended History products and printed products wherever possible.

Vallins migration to the United States +

Vallins Settlers in United States in the 17th Century