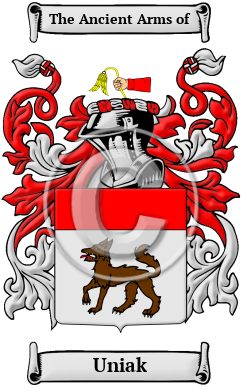 When the Stongbow settlers arrived in Ireland, they quickly learned that the Irish had a pre-established system of hereditary surnames. The name Uniak is an occupational surname, which was primarily from the Anglo-Norman culture. There were a few Irish occupational names, however, previous to the arrival of the Strongbownians, so this Anglo-Norman tradition was not too incongruous within the island. Occupational surnames were derived from a word describing the actual job done by the initial name bearer. The Strongbownians frequently prefixed these names with the French word le, meaning the, but this custom quickly died out in Ireland. The surname Uniak came from a common occupational name for a valued military officer. The surname Uniak is derived from the expression Unicus Est. According to tradition, during the bitter 13th century feuds between the two powerful Anglo-Norman families of the Fitzgeralds and the Butlers, a Commander who sought help to secure a position pointed to a particularly valued captain and said Unicus Est, which means Hei is the only one to undertake this service. The name Garde was also used as a synonym.

Early Origins of the Uniak family

The surname Uniak was first found in County Cork (Irish: Corcaigh) the ancient Kingdom of Deis Muin (Desmond), located on the southwest coast of Ireland in the province of Munster, where they held a family seat from ancient times, soon after the Anglo Norman Conquest of Ireland by Strongbow in 1172 A.D. That this family name were Norman mercenaries seems reasonably clear. In the bitter 13th century feuds between the Fitzgeralds and the Butlers it is said that a commander, seeking help to secure a position, pointed to one of the captains and said, 'Unicus Est', meaning 'He is the only one to undertake this service'. Hence this expression not only became the family motto but it also became the basis and origin of the family name itself, Uniacke. Later some used Gard as a synonym.

Early History of the Uniak family

This web page shows only a small excerpt of our Uniak research. Another 87 words (6 lines of text) covering the years 197 and 1976 are included under the topic Early Uniak History in all our PDF Extended History products and printed products wherever possible.

It was found during an investigation of the origins of the name Uniak that church officials and medieval scribes often spelled the name as it sounded. This practice lead to a single person's being documented under many spelling variations. The name Uniak has existed in the various shapes: Uniacke, Uniake, Uniack, Uniak, Garde, Gard and others.

More information is included under the topic Early Uniak Notables in all our PDF Extended History products and printed products wherever possible.

Migration of the Uniak family

A great number of Irish families left their homeland in the late 18th century and throughout the 19th century, migrating to such far away lands as Australia and North America. The early settlers left after much planning and deliberation. They were generally well off but they desired a tract of land that they could farm solely for themselves. The great mass of immigrants to arrive on North American shores in the 1840s differed greatly from their predecessors because many of them were utterly destitute, selling all they had to gain a passage on a ship or having their way paid by a philanthropic society. These Irish people were trying to escape the aftermath of the Great Potato Famine: poverty, starvation, disease, and, for many, ultimately death. Those that arrived on North American shores were not warmly welcomed by the established population, but they were vital to the rapid development of the industry, agriculture, and infrastructure of the infant nations of the United States and what would become Canada. Early passenger and immigration lists reveal many Irish settlers bearing the name Uniak: Edward Uniacke arrived in Philadelphia, Pennsylvania in 1852.