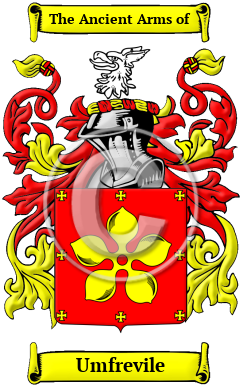 The name Umfrevile was brought to England in the great wave of migration following the Norman Conquest of 1066. The Umfrevile family lived in "Amfreville, in the viscounty of Evereux, which was held by the service of two knights. This family came to England at the Conquest." [1]

Early Origins of the Umfrevile family

The surname Umfrevile was first found in Northumberland where they held a family seat from 1066, when William, Duke of Normandy, granted the forest, valley, and Lordship of Riddesdale, to Sir Robert Umfreville (nicknamed Robert with the Beard,) Lord of Tours and Vian in Normandy.

Early History of the Umfrevile family

This web page shows only a small excerpt of our Umfrevile research. Another 118 words (8 lines of text) covering the years 1743, 1245, 1246, 1308, 1277 and 1325 are included under the topic Early Umfrevile History in all our PDF Extended History products and printed products wherever possible.

Outstanding amongst the family at this time was Gilbert de Umfraville (d.1245), a 13th-century nobleman; and his son, Gilbert de Umfraville, Earl of Angus (r. 1246-1308), the first of...
Another 28 words (2 lines of text) are included under the topic Early Umfrevile Notables in all our PDF Extended History products and printed products wherever possible.

Migration of the Umfrevile family

Many English families emigrated to North American colonies in order to escape the political chaos in Britain at this time. Unfortunately, many English families made the trip to the New World under extremely harsh conditions. Overcrowding on the ships caused the majority of the immigrants to arrive diseased, famished, and destitute from the long journey across the stormy Atlantic. Despite these hardships, many of the families prospered and went on to make invaluable contributions to the development of the cultures of the United States and Canada. Early North American immigration records have revealed a number of people bearing the name Umfrevile or a variant listed above: Robert Umfravill who landed in America in 1760.