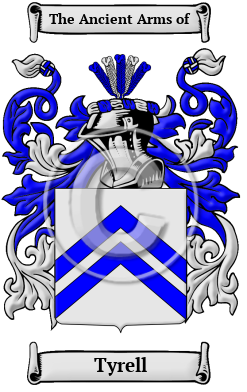 The ancient Anglo-Saxon culture once found in Britain is the soil from which the many generations of the Tyrell family have grown. The name Tyrell was given to a member of the family who was a stubborn or obstinate person. The surname Tyrell is derived from the Old French word tirer, which means to draw. This is used in the same sense as the word tirand, which means "one who pulls on the reins;" thus it may be that it was used as a nickname for a stubborn person, before coming to be used as a hereditary surname.

Early Origins of the Tyrell family

The surname Tyrell was first found in Essex where one of the first records of the name is Walter Tirel III, (1065-c. 1100), Castellan of Pontoise and Lord of Poix, son of Walter Tirell II. [1]

Early History of the Tyrell family

Sound was what guided spelling in the essentially pre-literate Middle Ages, so one person's name was often recorded under several variations during a single lifetime. Also, before the advent of the printing press and the first dictionaries, the English language was not standardized. Therefore, spelling variations were common, even among the names of the most literate people. Known variations of the Tyrell family name include Tyrell, Terrell, Terrill, Tyrill, Turrell, Tirell, Tyrrell and many more.

Notables of this surname at this time include: Sir James Tyrrell (c.1450-1502), an English knight, a trusted servant of King Richard III of England; he confessed to the murders of King Edward V of England and his brother Richard of Shrewsbury, 1st Duke of York and was beheaded at Tower Hill in 1502; Sir Peter Tyrell; Sir John Tyrell (1597-1676), an...
Another 61 words (4 lines of text) are included under the topic Early Tyrell Notables in all our PDF Extended History products and printed products wherever possible.

In the United States, the name Tyrell is the 11,614th most popular surname with an estimated 2,487 people with that name. [5]

Migration of the Tyrell family to Ireland

Some of the Tyrell family moved to Ireland, but this topic is not covered in this excerpt.
Another 78 words (6 lines of text) about their life in Ireland is included in all our PDF Extended History products and printed products wherever possible.

Tyrell migration to the United States +

For political, religious, and economic reasons, thousands of English families boarded ships for Ireland, the Canadas, the America colonies, and many of smaller tropical colonies in the hope of finding better lives abroad. Although the passage on the cramped, dank ships caused many to arrive in the New World diseased and starving, those families that survived the trip often went on to make valuable contributions to those new societies to which they arrived. Early immigrants bearing the Tyrell surname or a spelling variation of the name include :

Tyrell Settlers in United States in the 18th Century

Tyrell Settlers in United States in the 19th Century

Tyrell Settlers in Canada in the 19th Century

Tyrell Settlers in Australia in the 19th Century

Tyrell Settlers in New Zealand in the 19th Century

Tyrell Settlers in West Indies in the 18th Century

Historic Events for the Tyrell family +