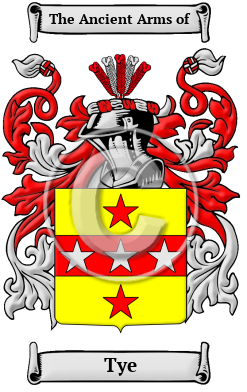 Early Origins of the Tye family

The surname Tye was first found in Nottingham where they were known as the Barons Tyes and even before the Conquest were a family great significance in that shire and in the county of Rutland.

However, one of the first records of the name was found much further to the south at Mousehole in Cornwall. "This place, which is also called Port Enys, is situated on the western shore of Mount's bay in the English Channel; and though at present only a large fishing-village, was formerly of considerable importance. In 1293, Henry de Tyes obtained for it the grant of a market on Tuesday, to which was afterwards added a fair on the festival of St. Barnabas." [1]

In the reign of Edward I. the manor of Alwarton in the parish of Madern, Cornwall belonged to the baronial family of Tyes, from whom it passed by female heirs successively to the Lisles and Berkeleys. [2]

Over in the town of Penzance, "a fort was built by one of the family of Tyes, in whose manor of Alwarton the town now stands. It was one of this family who obtained a market for Mousehole in the reign of Edward I. Yet the existence of this fort is only known from the name of its site, and from the aspect of the site itself. So early as 1292 a market was procured for it by Henry de Tyes; this was then held on Tuesdays, and to this was added a fair for three days, held on the festival of St. Barnabas." [2]

Early History of the Tye family

Spelling variations of this family name include: Tye, Tee, Tyes, Tigh and others.

Notables of the family at this time include Christopher Tye (c.1505-c.1572), an English composer and organist; and Robert Tighe (died 1620), an English cleric and linguist, Archdeacon of...
Another 28 words (2 lines of text) are included under the topic Early Tye Notables in all our PDF Extended History products and printed products wherever possible.

In the United States, the name Tye is the 7,114th most popular surname with an estimated 4,974 people with that name. [3]

Migration of the Tye family to Ireland

Some of the Tye family moved to Ireland, but this topic is not covered in this excerpt.
Another 42 words (3 lines of text) about their life in Ireland is included in all our PDF Extended History products and printed products wherever possible.

Tye migration to the United States +

Tye Settlers in United States in the 17th Century

Tye Settlers in United States in the 18th Century

Tye Settlers in United States in the 19th Century

Tye Settlers in Canada in the 19th Century

Tye Settlers in Australia in the 19th Century