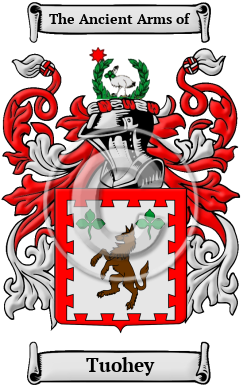 Early Origins of the Tuohey family

The surname Tuohey was first found in County Galway (Irish: Gaillimh) part of the province of Connacht, located on the west coast of the Island, where they held a family seat as a clann, and their chief was known as O'Tuathaigh (meaning ruler). They were amongst the many tribes of western Ireland, septs of the Hy Niall who were descended from King Niall of the Nine Hostages. King Niall was perhaps the most famous of all Irish Kings being responsible for harassing the Roman departure from England at the foot of the Alps.

Early History of the Tuohey family

This web page shows only a small excerpt of our Tuohey research. Another 96 words (7 lines of text) covering the year 1593 is included under the topic Early Tuohey History in all our PDF Extended History products and printed products wherever possible.

Many spelling variations of the surname Tuohey can be found in the archives. One reason for these variations is that ancient scribes and church officials recorded names as they were pronounced, often resulting in a single person being recorded under several different spellings. The different spellings that were found include Tuohy, Tuohey, Touhy, Touhey, Tooey, Tooy, Towey, Towy, Twoey, Twoy, Twohig, Toohey, Toohy,O'Tuohy, O'Tuohey, O'Touhy, O'Touhey, O'Tooey, O'Tooy, O'Towey, O'Towy, O'Twoey, O'Twoy, O'Twohig, O'Toohey and many more.

More information is included under the topic Early Tuohey Notables in all our PDF Extended History products and printed products wherever possible.

Tuohey Settlers in Australia in the 19th Century