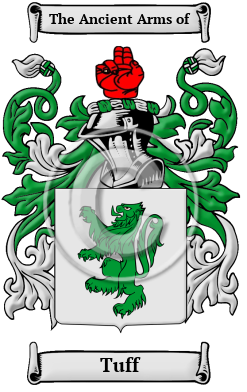 The surname Tuff is a topographic surname, which was given to a person who resided near a physical feature such as a hill, stream, church, or type of tree. Habitation names form the other broad category of surnames that were derived from place-names. They were derived from pre-existing names for towns, villages, parishes, or farmsteads. Other local names are derived from the names of houses, manors, estates, regions, and entire counties. As a general rule, the greater the distance between an individual and their homeland, the larger the territory they were named after. For example, a person who only moved to another parish would be known by the name of their original village, while people who migrated to a different country were often known by the name of a region or country from which they came. The name Tuff is derived from the Old French word touche, meaning thicket, and indicates that the original bearer lived near a thicket.

Early Origins of the Tuff family

The surname Tuff was first found in Cheshire, where the family is conjecturally descended from Joslin de Touche, who was granted lands by King William, the Duke of Normandy, after the Conquest. The Touches were Lords of Audley, the Earls of Castlehaven. By the 14th century, many of these Norman nobles moved north to Scotland and were granted land by King David of Scotland.

Early History of the Tuff family

This web page shows only a small excerpt of our Tuff research. Another 112 words (8 lines of text) covering the years 1361, 1549, and 1561 are included under the topic Early Tuff History in all our PDF Extended History products and printed products wherever possible.

Spelling variations of this family name include: Touch, Toulch, Tough, Tuff, Tuf, Toucht and others.

More information is included under the topic Early Tuff Notables in all our PDF Extended History products and printed products wherever possible.

In Newfoundland, Canada, the name Tuff is the 799th most popular surname with an estimated 51 people with that name. [1]

Tuff migration to the United States +

Tuff Settlers in United States in the 19th Century

Tuff Settlers in Canada in the 18th Century

Tuff Settlers in Canada in the 19th Century

Tuff Settlers in Australia in the 19th Century

Historic Events for the Tuff family +