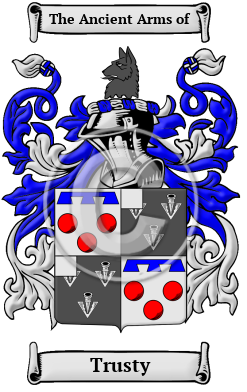 Early Origins of the Trusty family

The surname Trusty was first found in Devon where "it appears as a Christian name in England from the end of the 12th century, usually in the form Tristram." [1] The name is derived from the Celtic Drystan, from drestm drust meaning 'tumult, din.' [1]

Another source claims the name was from the Cornish Trestean, Tresteen, probably meaning the Stained or Coloured House [Cornish and Welsh tre, a homestead, farm, etc. + the Cornish cogn. of Welsh ystaen, stained, coloured]. "It is tempting to see the Cornish stean = Welsh ystaen, tin, in this name." [2]

Found initially as a forename, early rolls show Tristam Cementarius in the Curia Regis Rolls of 1204. Tristram le Cheverer was found in London in 1278 and Tristam Merewyne was listed in the Subsidy Rolls for Sussex in 1296. [1]

Tristan (Tristram or Tristain) is the hero of the legend of Tristan and Iseult. In the legend, he is tasked with escorting the Irish princess Iseult to wed Tristan's uncle, King Mark of Cornwall, but they accidentally drink a love potion during the journey and fall in love. Tristan is banished and later died. According to the legend, his is the nephew of King Mark of Cornwall. Today the The Tristan Stone, or The Longstone (Cornish: Menhir, meaning long stone), stands beside the road leading to Fowey in Cornwall. Richard Wagner composed the opera Tristan and Isolde based on the legend in the mid 19th century. Since then, there have been numerous films based on the character and his plight.

Early History of the Trusty family

Spelling variations of this family name include: Tristram, Trestram, Tristam and others.

More information is included under the topic Early Trusty Notables in all our PDF Extended History products and printed products wherever possible.

In the United States, the name Trusty is the 9,075th most popular surname with an estimated 2,487 people with that name. [3]

Trusty migration to the United States +

Trusty Settlers in United States in the 20th Century