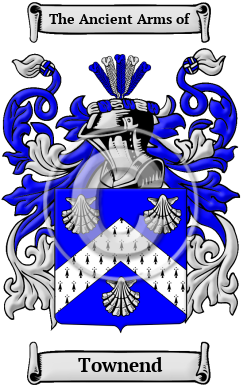 The ancestors of the name Townend date back to the Anglo-Saxon tribes of Britain. The name is derived from when the Townend family lived on the outskirts of a village. The surname Townend literally refers to a dweller "at the town's end." The name belongs to the class of topographic surnames, which were given to people who resided near physical features such as hills, streams, churches, or types of trees.

Early Origins of the Townend family

The surname Townend was first found in Norfolk, at Snoring Magna (Great Snoring) where one of the first records of the name was found there in 1377. "In 1398, John Townshend settled at Rainham, which according to some accounts accrued to them by the heiress of Havile. " [1]

Another source confirms this noble family's status. "In 1398, the ancestor of the Marquis Townshend was at Rainham, the present seat of the family." [2]

Raynham Hall is a country house in Norfolk, England. Completed shortly after the death of Sir Roger Townsend's death in 1637, it has been the seat of the Townshend family for nearly 400 years. The Hall is reported to be haunted, and was the scene of the famous ghost photo of the Brown Lady descending the staircase.

Early History of the Townend family

It is only in the last few hundred years that the English language has been standardized. For that reason, early Anglo-Saxon surnames like Townend are characterized by many spelling variations. As the English language changed and incorporated elements of other European languages, even literate people changed the spelling of their names. The variations of the name Townend include: Townsend, Townshend and others.

Notables of the family at this time include Sir Roger Townshend (ca. 1430-1493), who was knighted by Henry VII in 1486; Sir John Townshend (c.1568-1603), of Raynham Hall in Norfolk, an English soldier and Member of Parliament, killed in a duel with Sir Matthew Browne in August 1603; Sir Roger Townshend, 1st Baronet (c.1596-1637), an English landowner and politician; Horatio Townshend (1630-1687), who was Created Viscount...
Another 66 words (5 lines of text) are included under the topic Early Townend Notables in all our PDF Extended History products and printed products wherever possible.

Migration of the Townend family to Ireland

Some of the Townend family moved to Ireland, but this topic is not covered in this excerpt.
Another 60 words (4 lines of text) about their life in Ireland is included in all our PDF Extended History products and printed products wherever possible.

Townend migration to the United States +

Many English families tired of political and religious strife left Britain for the new colonies in North America. Although the trip itself offered no relief - conditions on the ships were extremely cramped, and many travelers arrived diseased, starving, and destitute - these immigrants believed the opportunities that awaited them were worth the risks. Once in the colonies, many of the families did indeed prosper and, in turn, made significant contributions to the culture and economies of the growing colonies. An inquiry into the early roots of North American families has revealed a number of immigrants bearing the name Townend or a variant listed above:

Townend Settlers in United States in the 17th Century

Townend Settlers in Australia in the 19th Century

Townend Settlers in New Zealand in the 19th Century