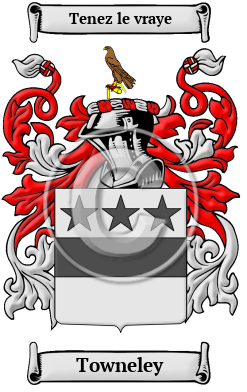 The origins of the Towneley name come from when the Anglo-Saxon tribes ruled over Britain. The name Towneley was originally derived from a family having lived in the settlement of Towneley in the county of Lancashire, or by any clearing in which a farm was situated. The surname Towneley thus belongs to both the category of habitation names, which are derived from pre-existing names for towns, villages, parishes, or farmsteads, and class of topographic surnames, which were given to people who resided near physical features such as hills, streams, churches, or types of trees.

Early Origins of the Towneley family

The surname Towneley was first found in Lancashire where they were descended from Spartlingus, the first Dean of Whalley about 896 A.D. Descended was Liwlphus, Cudwlphus, Henricus the great Baron of Whalley. He was followed by Robertus, Geoffrey who married the daughter of Roger de Lacy, Constable of Cheshire in 1193.

"An estate in Lancashire, which belonged to this ancient and distinguished family, whose pedigree is said to be traced to the time of King Alfred, and to Spartlingus, first Dean of Whalley, who flourished about the year 896. The line of this personage terminated with an heiress, Cecilia of Towneley, in the XIV. century, who married John del Legh, and conveyed the estate to his family. He died in or about 1330, and his great-grandson resumed the ancient surname of Towneley. John del Legh was a cadet of the great Cheshire family of that name. Towneley Hall is still the seat of this race, who may well challenge comparison in point of venerable antiquity with any family in England." [1]

Early History of the Towneley family

Before English spelling was standardized a few hundred years ago, spelling variations of names were a common occurrence. Elements of Latin, French and other languages became incorporated into English through the Middle Ages, and name spellings changed even among the literate. The variations of the surname Towneley include Townley, Towneley and others.

Notables of the family at this time include Charles Towneley (1600-1644); and his son, Richard Towneley (1629-1707), an English mathematician and astronomer from Towneley near Burnley, Lancashire who first postulated a theory that Robert Boyle later publish as Boyle's Law, but Boyle referred to as Mr Towneley's hypothesis. Christopher Towneley (1604-1674), was an English antiquary, called 'the...
Another 55 words (4 lines of text) are included under the topic Early Towneley Notables in all our PDF Extended History products and printed products wherever possible.

Migration of the Towneley family to Ireland

Some of the Towneley family moved to Ireland, but this topic is not covered in this excerpt.
Another 34 words (2 lines of text) about their life in Ireland is included in all our PDF Extended History products and printed products wherever possible.

Migration of the Towneley family

A great wave of immigration to the New World was the result of the enormous political and religious disarray that struck England at that time. Families left for the New World in extremely large numbers. The long journey was the end of many immigrants and many more arrived sick and starving. Still, those who made it were rewarded with an opportunity far greater than they had known at home in England. These emigrant families went on to make significant contributions to these emerging colonies in which they settled. Some of the first North American settlers carried this name or one of its variants: Henry and Margaret Townley settled in Maryland in 1721; Mary Townley settled in New England in 1756; Patrick and William Townley arrived in Philadelphia in 1834..