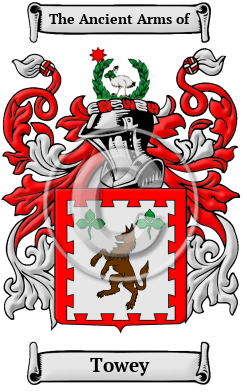 Early Origins of the Towey family

The surname Towey was first found in County Galway (Irish: Gaillimh) part of the province of Connacht, located on the west coast of the Island, where they held a family seat as a clann, and their chief was known as O'Tuathaigh (meaning ruler). They were amongst the many tribes of western Ireland, septs of the Hy Niall who were descended from King Niall of the Nine Hostages. King Niall was perhaps the most famous of all Irish Kings being responsible for harassing the Roman departure from England at the foot of the Alps.

Early History of the Towey family

This web page shows only a small excerpt of our Towey research. Another 96 words (7 lines of text) covering the year 1593 is included under the topic Early Towey History in all our PDF Extended History products and printed products wherever possible.

People who were accounted for by scribes and church officials often had their name recorded many different ways because pronunciation was the only guide those scribes and church officials had to go by. This resulted in the problem of one person's name being recorded under several different variations, creating the illusion of more than one person. Among the many spelling variations of the surname Towey that are preserved in archival documents are Tuohy, Tuohey, Touhy, Touhey, Tooey, Tooy, Towey, Towy, Twoey, Twoy, Twohig, Toohey, Toohy,O'Tuohy, O'Tuohey, O'Touhy, O'Touhey, O'Tooey, O'Tooy, O'Towey, O'Towy, O'Twoey, O'Twoy, O'Twohig, O'Toohey and many more.

More information is included under the topic Early Towey Notables in all our PDF Extended History products and printed products wherever possible.

Towey migration to the United States +

Death and immigration greatly reduced Ireland's population in the 19th century. For the native Irish people poverty, hunger, and racial prejudice was common. Therefore, thousands left their homeland to seek opportunity in North America. Those who survived the journey and the quarantine camps to which they arrived, were instrumental towards building the strong developing nations of the United States and the future Canada. By far, the largest influx of Irish settlers occurred with Great Potato Famine during the late 1840s. These were employed as construction or factory workers. An examination of passenger and immigration lists has shown early immigrants bearing the name Towey:

Towey Settlers in United States in the 19th Century

Towey Settlers in United States in the 20th Century

Towey Settlers in Canada in the 19th Century