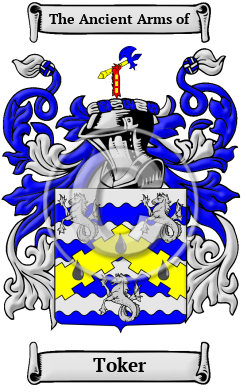 The name Toker is rooted in the ancient Anglo-Saxon culture. It was originally a name for someone who worked as a fuller, whose job it was to scour and thicken raw cloth by beating it and trampling it in water having derived from the Old English word tucian, which originally meant to torment and later gained the meaning to tuck or to full. [1] Occasionally, the name Toker was a nickname surname given to a courageous person.

Early Origins of the Toker family

The surname Toker was first found in Devon. "Tucker is a very characteristic west of England name. Its great home is in Devonshire, and it is especially numerous in the Barnstaple district. It is also found in numbers in Somerset, and occurs too, but much less frequently, in Cornwall, Dorset, Hants, and Wilts. Tucker was the west of England name for a fuller. " [2]

As to agree with aforementioned, another source notes: "Tucker is still a great West country surname, being very strongly represented in Devon, Wiltshire, and Dorset. " [3]

The earliest record found for the family was Roger le Tukere, who was listed in the Hundredorum, Rolls for Dorset in 1273. [3]

Early History of the Toker family

It is only in the last few hundred years that the English language has been standardized. For that reason, early Anglo-Saxon surnames like Toker are characterized by many spelling variations. As the English language changed and incorporated elements of other European languages, even literate people changed the spelling of their names. The variations of the name Toker include Tucker, Tooker, Toker, Tokker and others.

Notables of the family at this time include William Tucker or Tooker (1558?-1621), English divine, born at Exeter in 1557 or 1558, the third son of William Tooker of that town. In 1590 he became rector of Clovelly in Devonshire, but resigned the charge in 1601. [4] Giles Tooker (c 1565-1623), was an English lawyer and politician who sat in the House of Commons...
Another 62 words (4 lines of text) are included under the topic Early Toker Notables in all our PDF Extended History products and printed products wherever possible.

Migration of the Toker family to Ireland

Some of the Toker family moved to Ireland, but this topic is not covered in this excerpt.
Another 35 words (2 lines of text) about their life in Ireland is included in all our PDF Extended History products and printed products wherever possible.

Migration of the Toker family

Many English families tired of political and religious strife left Britain for the new colonies in North America. Although the trip itself offered no relief - conditions on the ships were extremely cramped, and many travelers arrived diseased, starving, and destitute - these immigrants believed the opportunities that awaited them were worth the risks. Once in the colonies, many of the families did indeed prosper and, in turn, made significant contributions to the culture and economies of the growing colonies. An inquiry into the early roots of North American families has revealed a number of immigrants bearing the name Toker or a variant listed above: John and Richard Tucker who settled in St. John's, Newfoundland in 1676; they were from Teignmouth in Devon, along with many more settlers in Newfoundland.