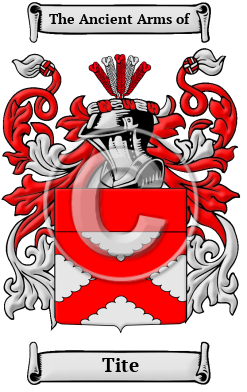 The Tite surname is generally thought to be derived from the Old Norse word "teitr," meaning "cheerful." According to the Venerable Bede, Tate was used as a nickname for Ethelberga daughter of Ethelbert, king of Kent. [1] Some sources suggest that its origins are quite distinct from the Old English roots of Tate.

Early Origins of the Tite family

The surname Tite was first found in Berwickshire an ancient county of Scotland, presently part of the Scottish Borders Council Area, located in the eastern part of the Borders Region of Scotland, where they held a family seat from early times. One of the first records of the name was Thomas dictus Tayt in 1329 who was listed as having a debt to the king at that time. There are several recorded instances of payments to a John Tayt, clerk of the hospital of Montrose, between 1362-70. Alexander Tayt was burgess of Edinburgh in 1381. Adam Tayte had a safe conduct to travel in England in 1424. [1]

Early History of the Tite family

Spelling variations occur frequently in Scottish names that date from the medieval era. They result from a general lack of grammatical rules and the tendency to spell names according to sound. Tite has been spelled Tait, Tate, Tayte, Taite and others.

Notable amongst the family name during their early history was Princess Tait of Kent; Faithful Teate (c.1626-1666) Irish Protestant clergyman and poet from County Cavan, Ireland, sometimes known as Faithful Tate or Faithfull Teate; and...
Another 34 words (2 lines of text) are included under the topic Early Tite Notables in all our PDF Extended History products and printed products wherever possible.

Migration of the Tite family to Ireland

Some of the Tite family moved to Ireland, but this topic is not covered in this excerpt.
Another 60 words (4 lines of text) about their life in Ireland is included in all our PDF Extended History products and printed products wherever possible.

Tite migration to the United States +

In the 20th century, the ancestors of many of those Boernician-Scottish people still populate North America. They distributed themselves on either side of the border at the time of the War of Independence. United Empire Loyalists went north to Canada and those who wanted a new nation stayed south. Both groups went on to found great nations. Some of the first North American settlers with Tite name or one of its variants:

Tite Settlers in United States in the 19th Century

Tite Settlers in United States in the 20th Century

Tite Settlers in Canada in the 20th Century

Tite Settlers in Australia in the 19th Century