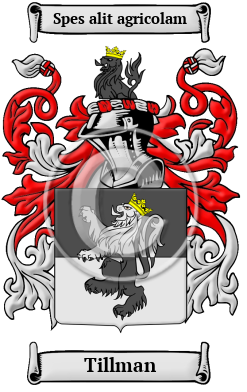 Tillman is an Anglo-Saxon name. The name was originally given to a farmer having been derived from the Old English word tilman, which means husbandman or farmer. [1] [2] Reaney postulates that the name could also have originated for the occupation "tile-man," as in "maker of tiles." [2]

"Tilmon was the name of one of the English priests who accompanied the ill- fated Hewalds in their mission to the Continental Saxons A.D. 690." [4]

Early Origins of the Tillman family

The surname Tillman was first found in Gloucestershire where Alexander Tileman was listed in the Pipe Rolls of 1204. A few years later, Alan Tileman was recorded in Assize Rolls for Cambridgeshire in 1260. Early in the 14th century, Adam Titleman was found in the Subsidy Rolls for Yorkshire in 1301. [2]

We found only one record of the family in the Hundredorum Rolls of 1273, that of Geoffrey Tileman in Huntingdonshire and in London, the Munimenta Gildhallæ Londoniensis recorded Walter Tileman. [1]

Early History of the Tillman family

This web page shows only a small excerpt of our Tillman research. Another 45 words (3 lines of text) covering the years 1684, 1734, 1684, 1708, 1666 and 1724 are included under the topic Early Tillman History in all our PDF Extended History products and printed products wherever possible.

One relatively recent invention that did much to standardize English spelling was the printing press. However, before its invention even the most literate people recorded their names according to sound rather than spelling. The spelling variations under which the name Tillman has appeared include Tillman, Tilman, Tilmanstone, Tilghman, Tileman and others.

Notables of this surname at this time include: Peter Tillemans (1684-1734), Belgium-born, English painter and draughtsman, born at Antwerp in 1684, was son of a diamond-cutter, but studied landscape-painting when young. He was brother-in-law to Peter Casteels, and in 1708 the two young men...
Another 43 words (3 lines of text) are included under the topic Early Tillman Notables in all our PDF Extended History products and printed products wherever possible.

In the United States, the name Tillman is the 792nd most popular surname with an estimated 37,305 people with that name. [5]

Tillman migration to the United States +

At this time, the shores of the New World beckoned many English families that felt that the social climate in England was oppressive and lacked opportunity for change. Thousands left England at great expense in ships that were overcrowded and full of disease. A great portion of these settlers never survived the journey and even a greater number arrived sick, starving, and without a penny. The survivors, however, were often greeted with greater opportunity than they could have experienced back home. These English settlers made significant contributions to those colonies that would eventually become the United States and Canada. An examination of early immigration records and passenger ship lists revealed that people bearing the name Tillman arrived in North America very early:

Tillman Settlers in United States in the 17th Century

Tillman Settlers in United States in the 18th Century

Tillman Settlers in United States in the 19th Century

Tillman Settlers in Canada in the 19th Century