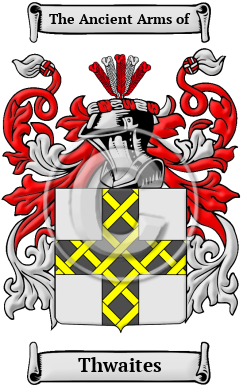 The distinguished surname Thwaites is thought to have emerged in the border region between North England and Scotland. It is derived from the Old Norse "pveit," meaning "meadow, piece of land." Thus, the name originally referred to a "dweller at the meadow." [1]

Thwaite as a parish can be found in Norfolk, Suffolk and as Thwaites in Cumberland. [2]

Early Origins of the Thwaites family

Later in Scotland, the Twatt variant was "a surname common to both Orkney and Shetland. The Twatts of Orkney may derive their surname from Twatt in Birsay, and the Twatts of Shetland from Twatt in the parish of Aithsting. John Twatt or Tuait raised an action at law against the rest of the heirs of Twat in 1563, and in 1580 there is recorded a wadset by Magnus Tuait." [4]

Early History of the Thwaites family

Notable amongst the family at this time was Robert Thwaits, an English medieval academic administrator, Vice-Chancellor of Oxford University (1441-1453) and Chancellor of Oxford University (1445-1446); Sir Thomas Thwaites (c.1435-1503), Chancellor of the Exchequer from 1471 to 1483, Chancellor of the Duchy of Lancaster from 1478 to 1483, and Treasurer of Calais from 1483 to 1490, was knighted in 1483, was arrested...
Another 62 words (4 lines of text) are included under the topic Early Thwaites Notables in all our PDF Extended History products and printed products wherever possible.

Thwaites migration to the United States +

Thwaites Settlers in United States in the 17th Century

Thwaites Settlers in United States in the 19th Century

Thwaites Settlers in Australia in the 19th Century

Thwaites Settlers in New Zealand in the 19th Century

Historic Events for the Thwaites family +