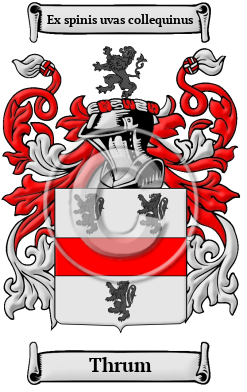 The name Thrum has a long Anglo-Saxon heritage. The name comes from when a family lived near a thorn bush or hedge. Thrum is a local surname, which belongs to the category of hereditary surnames. Other types of local surnames include topographic surnames, which could be given to a person who lived beside any physical feature, such as a hill, stream, church or type of tree. Habitation names form the other broad category of surnames that were derived from place-names. They were derived from pre-existing names for towns, villages, parishes, or farmsteads. Other local names are derived from the names of houses, manors, estates, regions, and entire counties. The surname Thrum comes from the Old English or Old Norse words which mean thorn. The surname Thrum may also be a habitational surname, for someone who came from a place named with this word, for example Thorne, in Somerset, or Thorns, in Suffolk. The Thrum family's origins date back to the period prior to the Norman Conquest of 1066, to the county of Somerset, where they resided at Thorne-Falcon and Thorne-St. Nargaret.

Early Origins of the Thrum family

The surname Thrum was first found in Somerset at Thorn(e) St. Margaret, a parish, in the union of Wellington, hundred of Milverton, about 3½ miles (W.) from Wellington. [1] The place name dates back to the Domesday Book of 1086 when it was first listed as Torne. [2]

Some of the first records of the name include: Adam atte Thorne; and William de Thorn who were both listed in Kirby's Quest at the time of Edward III. [3] [4] The Hundredorum Rolls of 1273 lists the following: Hugh Thorne in Cambridgeshire; and John de Thorn in Devon. [4]

"At Thorne, [Devon] a family of that name were seated from the reign of King John till the early part of the seventeenth century. " [5]

To confuse matters, another noted historian claims "the name is local, from Thornes in the parish of Shenstone, in the county of Stafford, where Robert, son of Roger de la Thorne, was resident early in the fourteenth century." [6] The integrity of this researcher bears no doubt.

However, we wish to have the reader note that this entry is significantly later that the previous entries and as such, in our opinion, is a later branch of the family. Great Thorness is a hamlet on the Isle of Wight, off the south coast of England.

Early History of the Thrum family

Spelling variations in names were a common occurrence before English spelling was standardized a few hundred years ago. In the Middle Ages, even the literate spelled their names differently as the English language incorporated elements of French, Latin, and other European languages. Many variations of the name Thrum have been found, including Thorn, Thorne and others.

Notables of the family at this time include John Thorne, Abbott of Reading, who was personally starved by King Henry VIII. William Thorne (fl. 1397), was an English historian, a monk of St. Augustine's, Canterbury and Robert Thorne (d. 1527), was an English merchant and geographical writer, the son...
Another 47 words (3 lines of text) are included under the topic Early Thrum Notables in all our PDF Extended History products and printed products wherever possible.

Migration of the Thrum family to Ireland

Some of the Thrum family moved to Ireland, but this topic is not covered in this excerpt. More information about their life in Ireland is included in all our PDF Extended History products and printed products wherever possible.

Thrum Settlers in Australia in the 19th Century