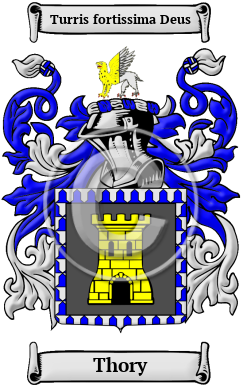 Early Origins of the Thory family

The surname Thory was first found in "Kincardineshire and in Fife, but Torrie of that Ilk was seated in Dumfriesshire till their forfeiture in the reign of James III, who regranted to Thomas Carruthers the lands and church of Tony. " [1]

Early History of the Thory family

Another 47 words (3 lines of text) are included under the topic Early Thory Notables in all our PDF Extended History products and printed products wherever possible.

Migration of the Thory family to Ireland

Some of the Thory family moved to Ireland, but this topic is not covered in this excerpt. More information about their life in Ireland is included in all our PDF Extended History products and printed products wherever possible.

Thory migration to the United States +

Thory Settlers in United States in the 17th Century

Thory Settlers in United States in the 18th Century