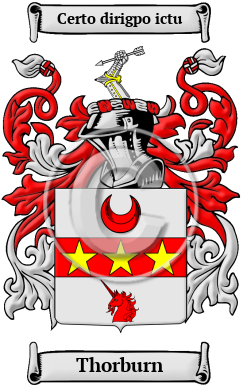 The origins of the name Thorburn are with the Anglo-Saxon tribes of Britain. The name is derived from the baptismal name for the son of Thurburn. This ancient personal name was originally derived from the name of the Saxon God of Thunder, Thor. After the Norman Conquest, the Old English naming system gradually dissolved. Old English names became less common and were replaced by popular continental European names. The earliest surnames in England were found shortly after the Norman Conquest and are of Norman French rather than native English origins.

Early Origins of the Thorburn family

The surname Thorburn was first found in Norfolk where Thomas filius Thurbernus (Turberni) was listed 1153-1186. A few years later, Richard Turbern was listed in the Feet of Fines in 1198 and later, Richard Thurubern was listed at Ely in Norfolk in 1277. The name may have been listed in the Domesday Book as Thurbernus, Turbern and Torbern, [1] but it from the Norfolk branch that seems the most prevalent in these early years. In Sussex, the name claims descendancy from Thunder (Thor) or Thunder's Hill at Chittingly. Thor was the name of the ancient Saxon God of Thunder.

Early History of the Thorburn family

This web page shows only a small excerpt of our Thorburn research. Another 49 words (4 lines of text) covering the years 1197, 1273, 1327, 1607, 1688, 1656 and 1659 are included under the topic Early Thorburn History in all our PDF Extended History products and printed products wherever possible.

The first dictionaries that appeared in the last few hundred years did much to standardize the English language. Before that time, spelling variations in names were a common occurrence. The language was changing, incorporating pieces of other languages, and the spelling of names changed with it. Thorburn has been spelled many different ways, including Thorburn, Thurburn, Thurbrand, Torburn and others.

More information is included under the topic Early Thorburn Notables in all our PDF Extended History products and printed products wherever possible.

In New Zealand, the name Thorburn is the 782nd most popular surname with an estimated 932 people with that name. [2]

Thorburn migration to the United States +

Thousands of English families in this era began to emigrate the New World in search of land and freedom from religious and political persecution. Although the passage was expensive and the ships were dark, crowded, and unsafe, those who made the voyage safely were rewarded with opportunities unavailable to them in their homeland. Research into passenger and immigration lists has revealed some of the very first Thorburns to arrive in North America:

Thorburn Settlers in United States in the 18th Century

Thorburn Settlers in United States in the 19th Century

Thorburn Settlers in United States in the 20th Century

Thorburn Settlers in Canada in the 19th Century

Thorburn Settlers in Canada in the 20th Century

Thorburn Settlers in New Zealand in the 19th Century