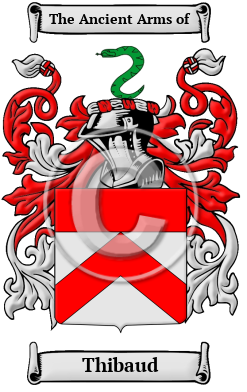 Early Origins of the Thibaud family

The surname Thibaud was first found in Burgundy (French: Bourgogne), an administrative and historical region of east-central France where they held a family seat and functioned as officers of the mounted constabulary (Maréchaussés) of Bourgogne and Bresse. The name belonged to a chivalrous house dating back to the year 1400, located in the region of Berry. A gentleman from the King's chamber and three ladies established nobility on 26th September 1694, 11th June 1704, and 30th July 1706. Tibbos Hill was a settlement (now known as Wreck Cove) located in the Burin-Burgeo District, south west of Belleoram, Newfoundland. [2]

Early History of the Thibaud family

This web page shows only a small excerpt of our Thibaud research. Another 95 words (7 lines of text) covering the years 1844, 1924 and 1921 are included under the topic Early Thibaud History in all our PDF Extended History products and printed products wherever possible.

More information is included under the topic Early Thibaud Notables in all our PDF Extended History products and printed products wherever possible.

In France, the name Thibaud is the 1,053rd most popular surname with an estimated 5,099 people with that name. [5]

Thibaud migration to the United States +

Thibaud Settlers in United States in the 18th Century

Thibaud Settlers in Canada in the 17th Century