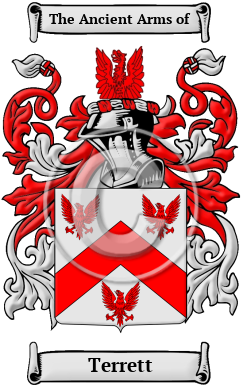 The ancient roots of the Terrett family name are in the Anglo-Saxon culture. The name Terrett comes from when the family lived in in Dorset at one of the eight places that have the prefix Tarrant. They include: Tarrant Crawford; Tarrant Gunville; Tarrant Hinton; Tarrant Keyneston; Tarrant Launceston; Tarrant Monkton; Tarrant Rawston; and Tarrant Rushton. The place name Tarrant is derived from the "Celtic river-name possibly meaning 'the trespasser' and in 'river liable to floods." [1] All of these parishes and villages are in the Blandford union, hundred of Pimperne [2] and are collectively listed in the Domesday Book as Tarente. [3] It seems that in the 13th century the parishes either expanded or separated and accordingly a suffix was needed to distinguish them. In many cases, the suffix was used to denote the families that lived there as in: Tarrant Gunville, home to the Gundeville family; Tarrant Keyneston, home of the Cahaignes family; Tarant Launceston, home to the Lowin family; Tarrant Rawston, home to the Antioch family; and Tarrant Rushton, home to the de Rusceaus family. The one exception was Tarrant Monkton which denoted as 'estate belonging to the monks of Tewkesbury Abbey.' [1]

Early Origins of the Terrett family

Early History of the Terrett family

This web page shows only a small excerpt of our Terrett research. Another 94 words (7 lines of text) covering the years 1086, 1621 and 1784 are included under the topic Early Terrett History in all our PDF Extended History products and printed products wherever possible.

One relatively recent invention that did much to standardize English spelling was the printing press. However, before its invention even the most literate people recorded their names according to sound rather than spelling. The spelling variations under which the name Terrett has appeared include Tarrant, Tarrents, Tarrent, Tarant, Tarent, Tarrat, Tarrett and many more.

More information is included under the topic Early Terrett Notables in all our PDF Extended History products and printed products wherever possible.

Migration of the Terrett family to Ireland

Some of the Terrett family moved to Ireland, but this topic is not covered in this excerpt.
Another 40 words (3 lines of text) about their life in Ireland is included in all our PDF Extended History products and printed products wherever possible.

Terrett migration to the United States +

At this time, the shores of the New World beckoned many English families that felt that the social climate in England was oppressive and lacked opportunity for change. Thousands left England at great expense in ships that were overcrowded and full of disease. A great portion of these settlers never survived the journey and even a greater number arrived sick, starving, and without a penny. The survivors, however, were often greeted with greater opportunity than they could have experienced back home. These English settlers made significant contributions to those colonies that would eventually become the United States and Canada. An examination of early immigration records and passenger ship lists revealed that people bearing the name Terrett arrived in North America very early:

Terrett Settlers in United States in the 17th Century

Terrett Settlers in United States in the 19th Century

Terrett Settlers in United States in the 20th Century

Terrett Settlers in Australia in the 19th Century

Terrett Settlers in West Indies in the 17th Century