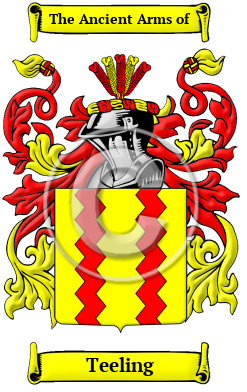 Early Origins of the Teeling family

The surname Teeling was first found in Coupar Angus (Gaelic: Aonghas), part of the Tayside region of northeastern Scotland, and present day Council Area of Angus, formerly known as Forfar or Forfarshire, where they held a family seat in their territories. The Pictish influence on Scottish history diminished after Kenneth Macalpine became King of all Scotland. But those east coast families still played an important role in government and were more accessible to Government than their western highland counterparts. Allegiances were important to Scottish middle age survival. Later they held a family seat at Cupar-Angus when John Teyln was at a tenant under the abbot in 1456. He was later a tenant of Ballgrco in 1457.

Early History of the Teeling family

This web page shows only a small excerpt of our Teeling research. Another 99 words (7 lines of text) covering the years 1483, 1880 and 1745 are included under the topic Early Teeling History in all our PDF Extended History products and printed products wherever possible.

More information is included under the topic Early Teeling Notables in all our PDF Extended History products and printed products wherever possible.

Teeling migration to the United States +

Teeling Settlers in United States in the 17th Century

Teeling Settlers in United States in the 19th Century

Historic Events for the Teeling family +