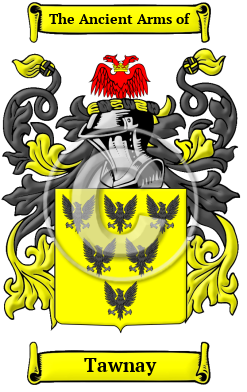 The name Tawnay was brought to England by the Normans when they conquered the country in 1066. The ancestors of the Tawnay family lived in Normandy where this "baronial name derived from the Castle of Tani. Auvrai de Tanie is on the Dives Roll : and Robert de Tany witnesses William the Conqueror's charter to Selby Abbey, Yorkshire.He held a barony in Essex, when the name was given to Stapleford-Tany, Chignall-Tany, and Latton-Tany." [1]

Early Origins of the Tawnay family

The surname Tawnay was first found in Essex where Hasculf, son or Robert de Tany, who in 1140 had a great suit with Rualo de Abrincis, also contested some property with William de Boville, who was the father of Rainald and Gruel. Rainald, a benefactor of Bermondsey Abbey in Surrey, left no heirs, and Gruel, or Grailand, succeeded, and certified in 1165 that he held three knight's fees de veteri feoffamento.[1]

Early History of the Tawnay family

It is only in the last few hundred years that the English language has been standardized. For that reason, Anglo-Norman surnames like Tawnay are characterized by many spelling variations. Scribes and monks in the Middle Ages spelled names they sounded, so it is common to find several variations that refer to a single person. As the English language changed and incorporated elements of other European languages such as Norman French and Latin, even literate people regularly changed the spelling of their names. The variations of the name Tawnay include Taney, Tanney, Tauny, Tauney, Tawney, Tawny, Tannie, Tani and many more.

Outstanding amongst the family at this time was Theaurau John Tany (bap. Thomas Totney 1608-1659), an English preacher and religious visionary. The morning of 30 December 1654, Tany made a large fire at Lambeth into which he cast his great saddle, sword, musket, pistols, books and bible and was committed to the Gatehouse prison where he was later bailed (1655) upon habeas corpus. "His surname is spelled in nine different ways, and seems to have been pronounced 'tawny.' A...
Another 78 words (6 lines of text) are included under the topic Early Tawnay Notables in all our PDF Extended History products and printed products wherever possible.

Migration of the Tawnay family

Faced with the chaos present in England at that time, many English families looked towards the open frontiers of the New World with its opportunities to escape oppression and starvation. People migrated to North America, as well as Australia and Ireland in droves, paying exorbitant rates for passages in cramped, unsafe ships. Many of the settlers did not make the long passage alive, but those who did see the shores of North America were welcomed with great opportunity. Many of the families that came from England went on to make essential contributions to the emerging nations of Canada and the United States. Some of the first immigrants to cross the Atlantic and come to North America carried the name Tawnay, or a variant listed above: the name represented in many forms and recorded from the mid 17th century in the great migration from Europe. Migrants settled in the eastern seaboard from Newfoundland, to Maine, to Virginia, the Carolinas, and to the islands..