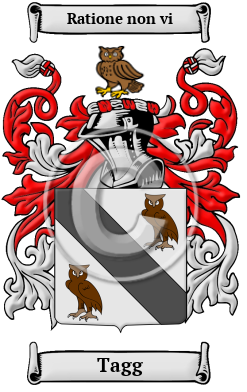 The chronicle of the name Tagg begins with a family in the Pictish clans of ancient Scotland. The name is derived from priest. Although the marriage of clerics in minor orders was permitted, the marriage of priests was banned during the 12th century. The Gaelic form of the name is Mac-an-t-sagairt, which means son of the priest.

Early Origins of the Tagg family

The surname Tagg was first found in Ross-shire (Gaelic: Siorrachd Rois) a former county, now part of the Council Areas of Highland and Western Isles in Northern Scotland, which emerged from the Gaelic lordship of the Earl of Ross, where they held a family seat from early times and their first records appeared on the early census rolls taken by the early Kings of Scotland to determine the rate of taxation of their subjects.

Early History of the Tagg family

This web page shows only a small excerpt of our Tagg research. Another 151 words (11 lines of text) covering the years 1215, 1544 and 1678 are included under the topic Early Tagg History in all our PDF Extended History products and printed products wherever possible.

When the first dictionaries were invented in the last few hundred years, spelling gradually became standardized. Before that time, scribes spelled according to sound. Names were often recorded under different spelling variations every time they were written. Tagg has been written MacTaggart, MacTagart, MacIntaggart, MacTuggart, MacToggart, MacTaggert, MacTeggart, Taggart, Tagart, Tegart, Tegert, Teggert, Teggart, Intaggart, Tuggart and many more.

More information is included under the topic Early Tagg Notables in all our PDF Extended History products and printed products wherever possible.

Migration of the Tagg family to Ireland

Some of the Tagg family moved to Ireland, but this topic is not covered in this excerpt.
Another 72 words (5 lines of text) about their life in Ireland is included in all our PDF Extended History products and printed products wherever possible.

Tagg Settlers in Australia in the 19th Century